We’ve been in this new place for awhile now, but this post was written so it might as well get published! I’m just too lazy to take pictures of it right now I guess, so family and friends, you’ll just have to come visit!

When we moved into our last rental we thought that after that short 6 month lease was up we’d have bought a house. We even started looking at houses. But in the end, we decided to continue renting for now. Our original lease was extended for a few months and finding this rental was just as difficult as the last (yes, the market is just as crazy – and people are still putting in deposits site unseen), but we successfully found another place to rent.

Because of all that craziness, our leases ended up overlapping a few weeks, so we were able to slowly move, taking an SUV load or two of boxes over each night and unpacking as we went. Then on the last weekend our rental truck only had to take our furniture. It definitely spared our backs being able to do a little at a time (and our wallets not having to pay anyone), but it sure dragged on and we were really glad to get everything moved in and be done with the other place.

Then it was on to unpacking furiously so the place could be quickly livable, and so we didn’t have to deal with box city when we had friends visit soon after the move. 🙂

We’re very happy with the house and area, even more-so than the last. We have friends living nearby and there are great restaurants and breweries as well as a lot to do in this part of town. From pretty much everywhere you can see the foothills and sometimes the mountains behind. There are more parks, lakes, and big open spaces. Our house is on a corner so we feel like we have our own big section of sky to watch the sunsets and the yard is much nicer too. The rental agency sent a landscaping company out to trim the huge cottonwood in the backyard shortly after we’d moved in. It’s actually the biggest tree in the neighborhood. If you’ve never seen people climb up into a tree and trim it, it’s pretty impressive. They make it look really easy and it is actually pretty entertaining. And thankfully, the tree is much less massive and sprawling now and we’ll have to worry less about anything coming down during a storm! We also spend a lot of mornings and evenings eating out on the back patio when the weather and season allow for it. Maggie of course seemed totally at home here pretty much right away, though it has definitely become “home” for us now too.

We’re planning on having some of my relatives here for Thanksgiving, so of course we wanted to have some home-brewed beer on tap. Since we have other things going on over the next few weeks and due to the amount of time it takes beer to ferment and then condition in the keg, we had…

When Maggie is unsure of something and is trying to get close, without totally committing to getting too close, she does the bob and weave dance. It’s hilarious. This video took place after she noticed the garter snake that we sometimes see around our yard go into these rocks. Of course, by the time we…

This year we spent Thanksgiving in El Paso, Texas visiting my sister and her fiancé. Originally they were going to come to us in CO, but unfortunately her company would not grant her the time off. That is a whole other ridiculous story in and of itself, but suffice it to say that we changed…

We found out we were expecting a baby back in November and have been super ecstatic since. This is the announcement we put up on Facebook. We thought using gear was fitting for two climbing enthusiasts. I suppose it’s possible our baby won’t grow up to be a climber (there’s also caving as well!) but…

Baby girl arrived near the end of July. It was a crazy long labor but all ended well. The short version of the story is that baby’s head was asynclitic, meaning it was tilted toward her shoulder, which made dilation extremely slow and uneven, and caused the pushing stage to also take a very long… 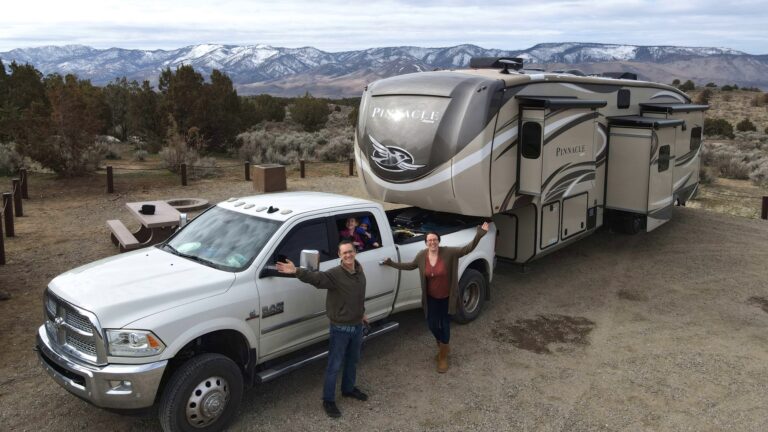 Now that we’re ready to hit the road again, we share how we find boondocking sites while we’re on the road to Death Valley! Whether it be camping on BLM land, camping in national forests, or otherwise free camping on public land, we share our tips on finding free camping. Let us show you how…