Looking for a Medford or Grants Pass day trip hike? In this video and post we explore the Sterling Mine Ditch trail. In the 1870’s gold was mined in the area and you can explore an old water tunnel that was used to bring water for hydraulic mining. We started at the Tunnel Ridge Trailhead for a two mile round trip. If you want to do a longer loop you can start at the Bear Gulch Trail for a five mile round trip.

We’re trying to bring you an adventure today, but we’ve already had a little bit of a setback. We’ll explain. So we’re in southern Oregon, and we are on our way to the Sterling Mine Ditch Trail where we’re going to go see some really neat stuff we want to show you. But as you can see we’re kind of here on the side of the road.

We’ve almost made it to our destination. I mean we are just a few miles from there. And our poor little guy was telling us that his stomach was not feeling so good. And then all of a sudden, you know… I’m, I’m gonna stop right there. Because I don’t even know how to describe it without making all of us and all of you guys sick as well. So we just had an unfortunate case of an upset tummy. And we just got him and all of that cleaned up.

We thought we were gonna be done and have to turn around for the day right? But what did he tell you? He said he still wants to go on and do it. So uh I guess he’s feeling better. It’s, it’s kind of funny, this has never actually happened to us before. Everybody in our family has a pretty strong stomach, and we’ve gone through lots of twisty roads and stuff. I hope we’re not in for this a lot, but as parents this is something new for us. So we are going to try to do this anyway. We will see you at the trailhead.

So we’re happy to report we made it to the trailhead without further incident. So summary of what we’re going to see today on the Sterling Mine Ditch Trail, is a historic canal that used to bring water for the old hydroelectric gold mining plant. And also a historic tunnel that helped get that ditch and water through a ridge. It looks pretty cool on pictures. We’re gonna go check it out ourselves today.

We’re starting at the Tunnel Ridge Trailhead. And that means we have the shortest access to that tunnel that you can get in this area. The actual trail I think is 30 miles long if you want to do like all the trails and all the other spurs. There’s a loop that you can do that’s five miles long starting just down the road at Bear Gulch Trailhead. But we’re not up for that. We’re gonna do one mile up, one mile back. It’s a little bit steep, but I think we can do it. So let’s go check out a tunnel. Let’s do it, and we’ll tell you more about it on the way.

The kids are stopping quite a lot because there’s a lot to see on this trail. Moss, and lichen, pretty rocks, sticks, flowers, the usual. If you were to do the Bear Gulch Loop, you would go up that way, around the Sterling Mine Ditch Trail, and then come down this way. We just have to remind ourselves that this means the way back will be all downhill.

Time for a little water and snack break. My guess is we’re about halfway up the trail, wouldn’t you say? Yeah I think so. Yeah, a little rest, and then we’ll push on to the summit. Summit?

All right so Kevin says it can’t be called a summit. The top of the trail. And the tunnel. All right, see you up there.

So I don’t know if you can actually hear it in the camera, but as we’ve been walking up here there’s just this constant droning sounds of these giant bumblebees. We’re getting into spring now, and the trees are all blooming. So I guess it’s no wonder that the bees are out.

So somewhere around here is the tunnel. Bear Gulch Trailhead goes this way. So I think it’s down over here. Let’s go check it out.

To put this in perspective, this is me standing up all, like kind of a half squat here. See it like this. Yeah. Just like Christine said, I totally thought that this was going to be a lot bigger than it is. And as you can see we can still fit in here, but you can’t stand up all the way. It’s kind of a stoop walk. But getting in is definitely almost a crawl. It was yeah, that’s for sure.

So they built this tunnel at the same time as they built the Sterling Mine Ditch, which we’re gonna go look for next. And that historic canal was built in 1877, and I think it’s 26.5 miles long to bring water here after they discovered gold in the Sterling Creek. So they started panning for gold, realized that wasn’t sufficient. They started hydraulic mining, and for that they needed a lot of water. So they redirected and brought water to this area in that ditch and built this tunnel so that they could cut through the ridge and didn’t have to go around it I guess. And this is 130 feet long, this tunnel. Let’s go see the other side, and then we can look at the sign out front and see if there’s anything we missed before looking for that canal. All right.

Getting shorter again. So we made it out the other side, obviously. That was quite strenuous. And it turns out that there is a trail that comes around the other side too that links up with the opposite end of it. So I think we’re going to actually go back in again and then go look for that ditch and see what we see. Let us know in the comments, would you crawl through this? It’s not that bad. No, it’s fun. If you come here you should do this part. It’s definitely harder to get in and out on this side. Made it!

So there is a sign here that has a little bit more information. And we did learn that the tunnel has filled in a little bit over time. But imagine several feet of water rushing through this in the past. And like Christine said, they used that water for hydraulic mining. So the water would rush out of here, and then they would direct it through a nozzle that they would use to dislodge debris and rock from the hillside. Yeah and so I guess that was pretty high powered. So it worked but it also was kind of costly to the environment because I guess it really disturbed the habitats around here. They took a while to really come back. So you know you got both sides of things there. Mining in the 1850s.

So the trail continues here past that water tunnel. And you walk right along the side of the old ditch itself. Yeah it’s pretty impressive because you know there is a part of the ditch on the other side of the tunnel that goes to, I think it’s called the Applegate River. And that’s where the river water was siphoned into this ditch. The sign back there says that it was hand dug by about 400 laborers. And can you imagine the conditions of being in here and doing that by hand? No thanks. Yeah, so three feet deep, 26 miles long approximately, and still here today.

Pretty impressive they produced four million dollars worth of gold here, all the way up till the 1930s in the Great Depression when it all shut down. And now it’s just a beautiful hiking trail. If you’re anywhere in southern Oregon near Medford, come check this out. It was really fun. And it is starting to sprinkle now. I hope it doesn’t start raining more. We have our rain jackets. I think that just means it’s our turnaround point. We’re gonna head back down. And we will catch you on the next adventure.

We hope that gives you some ideas for planning your own trip to hike the Sterling Mine Ditch Trail!

The Playmobil FunPark in Zirndorf (near Nürnberg, Germany) is amazing! While visiting family in Germany, my cousin Kathrin suggested we all take our kids and go. K and N love their cousins M and J and we all had a great day together. It was a day of non-stop play and wonder. This place is… 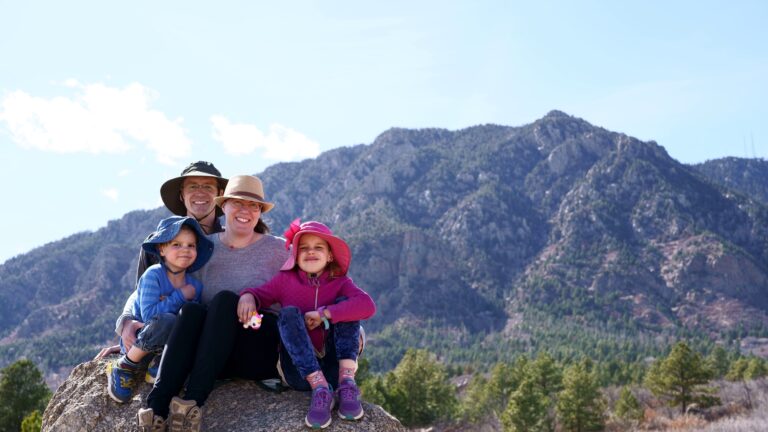 On our second day in the park, we hiked the Broken Top Trail which circles the Broken Top Cinder Cone. Along this trail were the Buffalo Caves which we poked around in. We also explored Dewdrop, Boy Scout, Beauty, and Indian Tunnel lava tube caves.  There was even ice in some of the caves Going…

Of course this entire trip has been a giant blessing, one that we are appreciating very much and are definitely not taking for granted. Like we’ve said before, we felt like it was time to leave the DC area and move, including taking this time off for all the reasons we described. We definitely felt…