Like Mt. Evans, Pikes Peak is another 14,000+ foot mountain that you can easily reach the top of simply by driving your car. To be exact, Pikes Peak is 14,115 feet tall. In doing some research I found out it is North America’s most visited mountain, and the second most visited in the world (according to pikes-peak.com). It is 31st tallest out of the 53 Colorado mountains over 14,000 feet tall. As an alternate to driving, you can pay to take the Cog Railway up, or you can hike it. 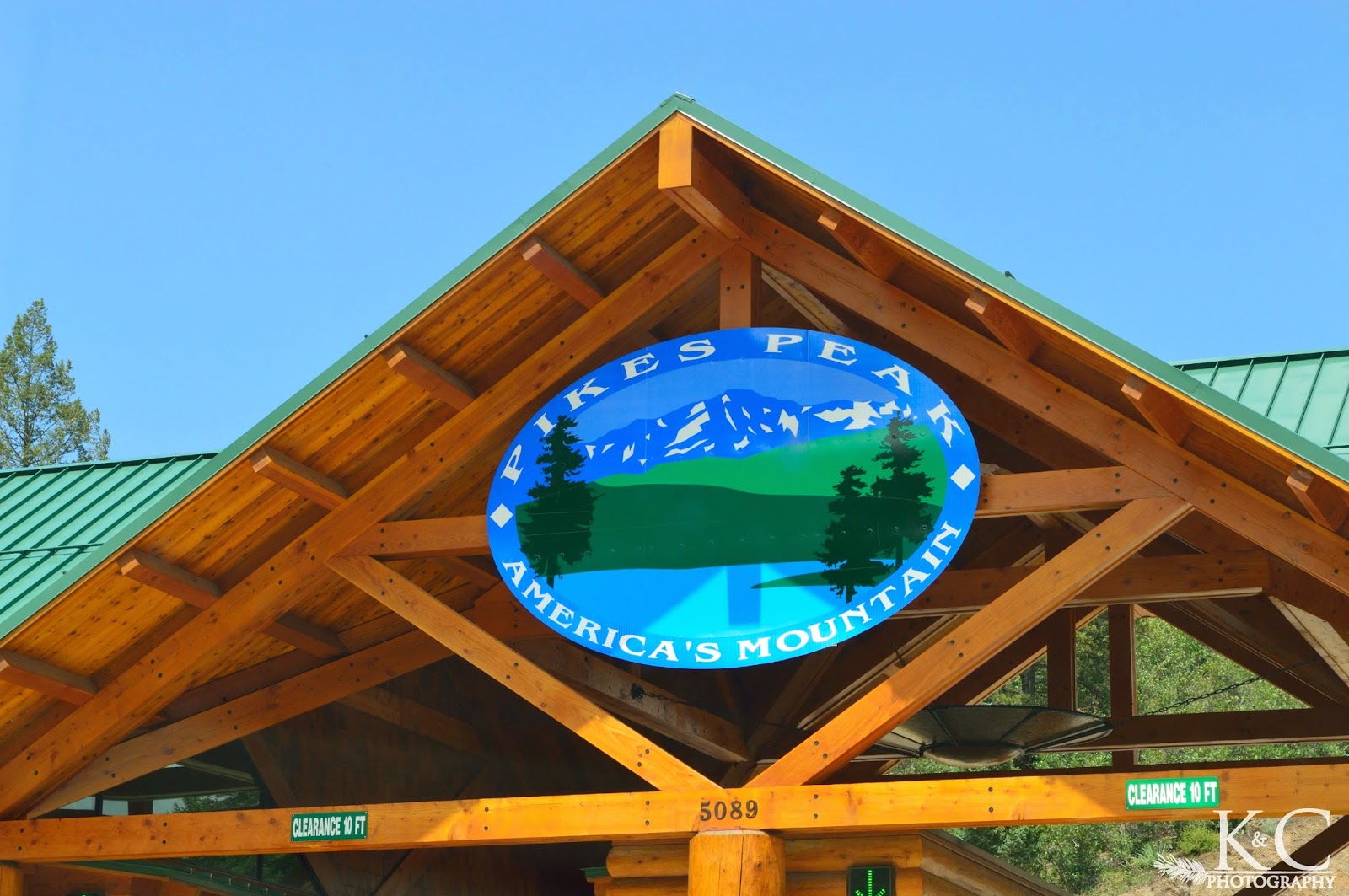 We had some very nice views on the way up. Before we’d made it to the top though, the clouds started obscuring the view. It was actually very pretty, the way the wispy clouds first started rolling over the mountainside. 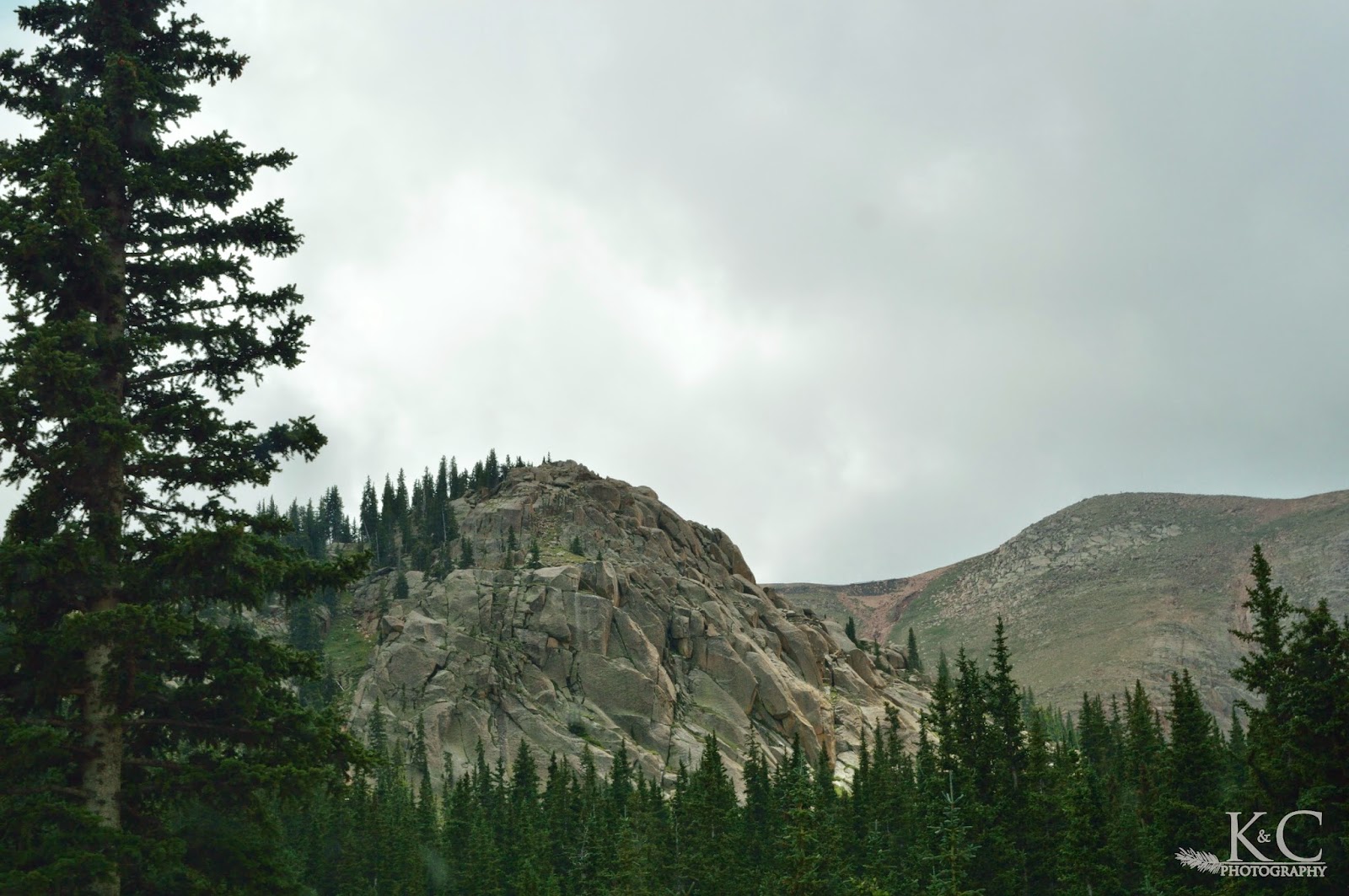 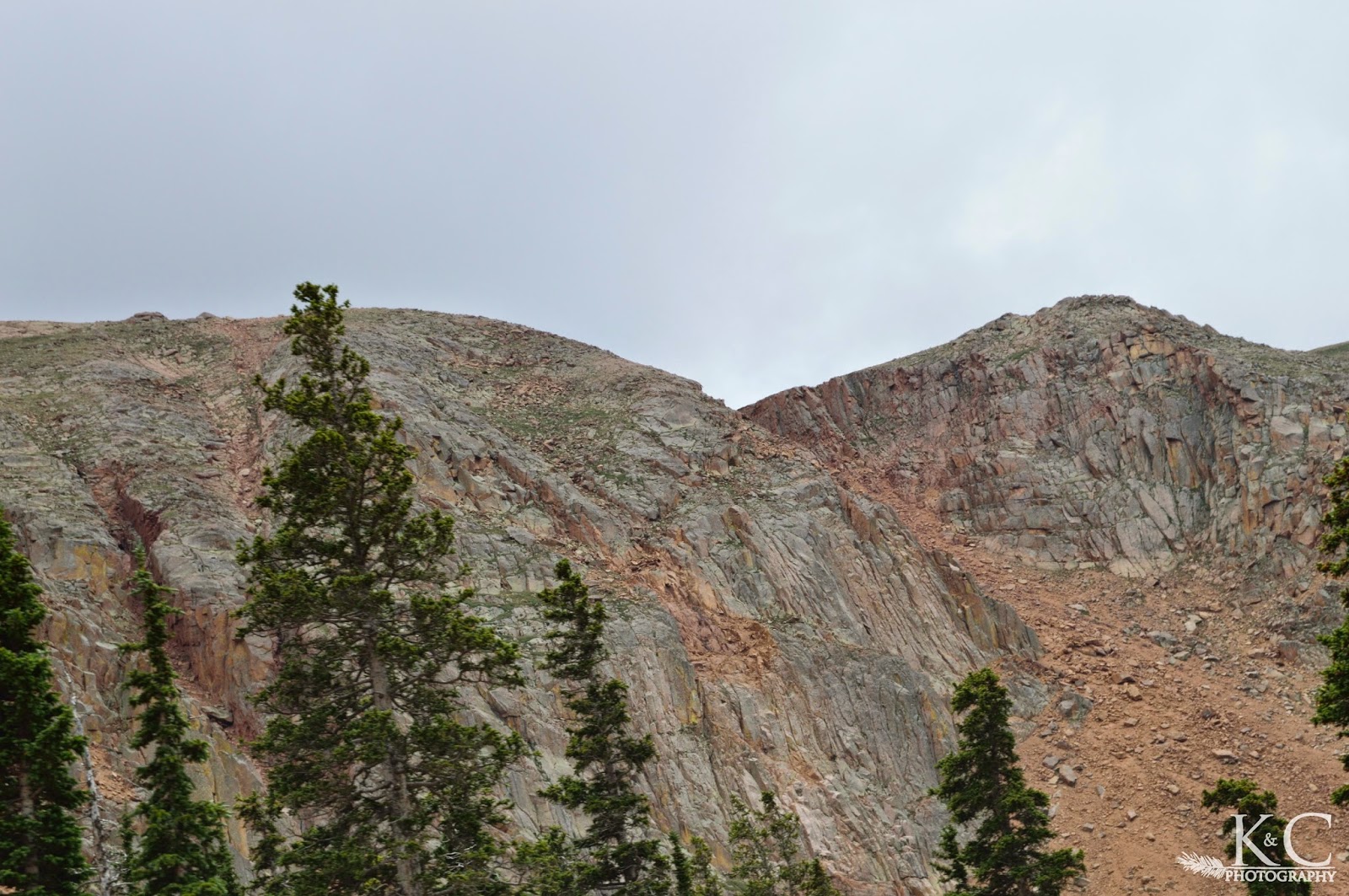 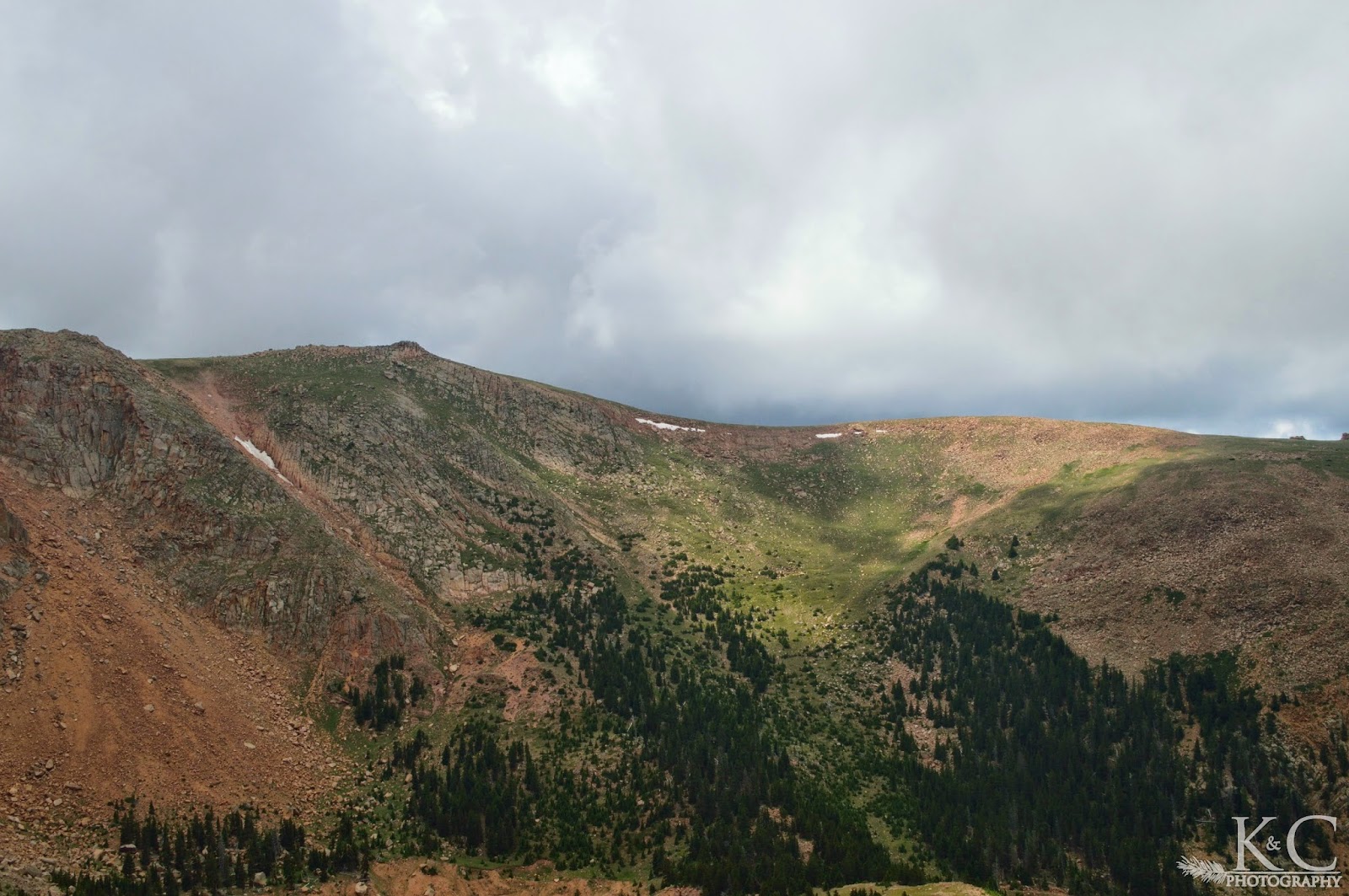 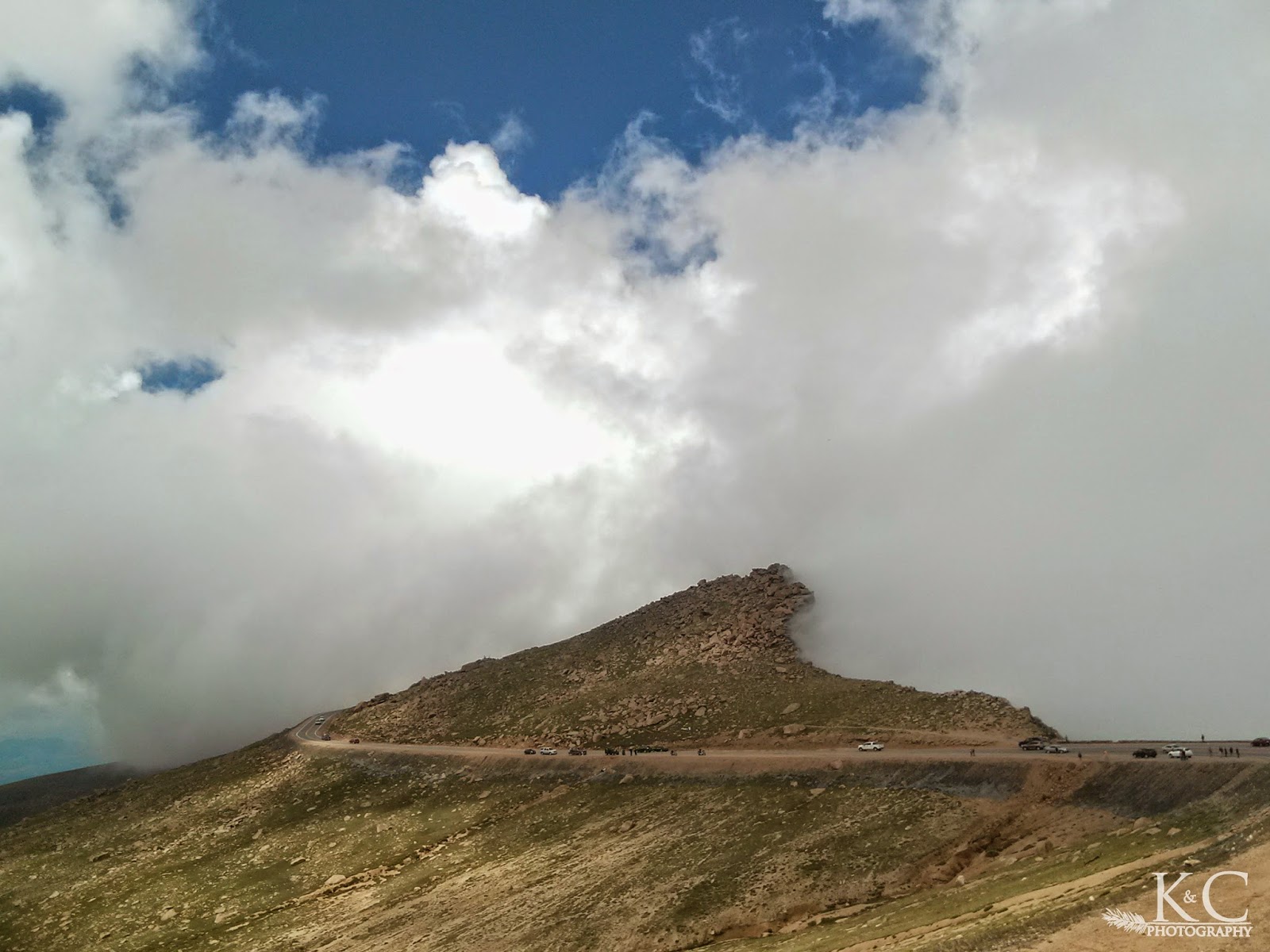 By the time we reached the top, the weather had completely closed in and there was not another view to be found. The Cog Railway was at the top though and we got a good look at it. This place brought back a lot of memories as I’d ridden both in the car and on the railway up to the top with my Mom when I was a child. Feels like another lifetime ago but it made me smile thinking of those experiences.

We had our pictures taken at each of the two summit signs (one on either side of the building). Inside, there is a gift shop and snack bar, which was absolutely packed. Pikes Peak is definitely much more touristy than Mt. Evans. Our stomach’s were growling so we indulged in what they called the “World Famous Pikes Peak Donut.” We were skeptical but it was surprisingly good. Fresh and more cake-like with a sprinkling of cinnamon sugar, it kept the hunger at bay until we drove back down the mountain and got some lunch in Colorado Springs. 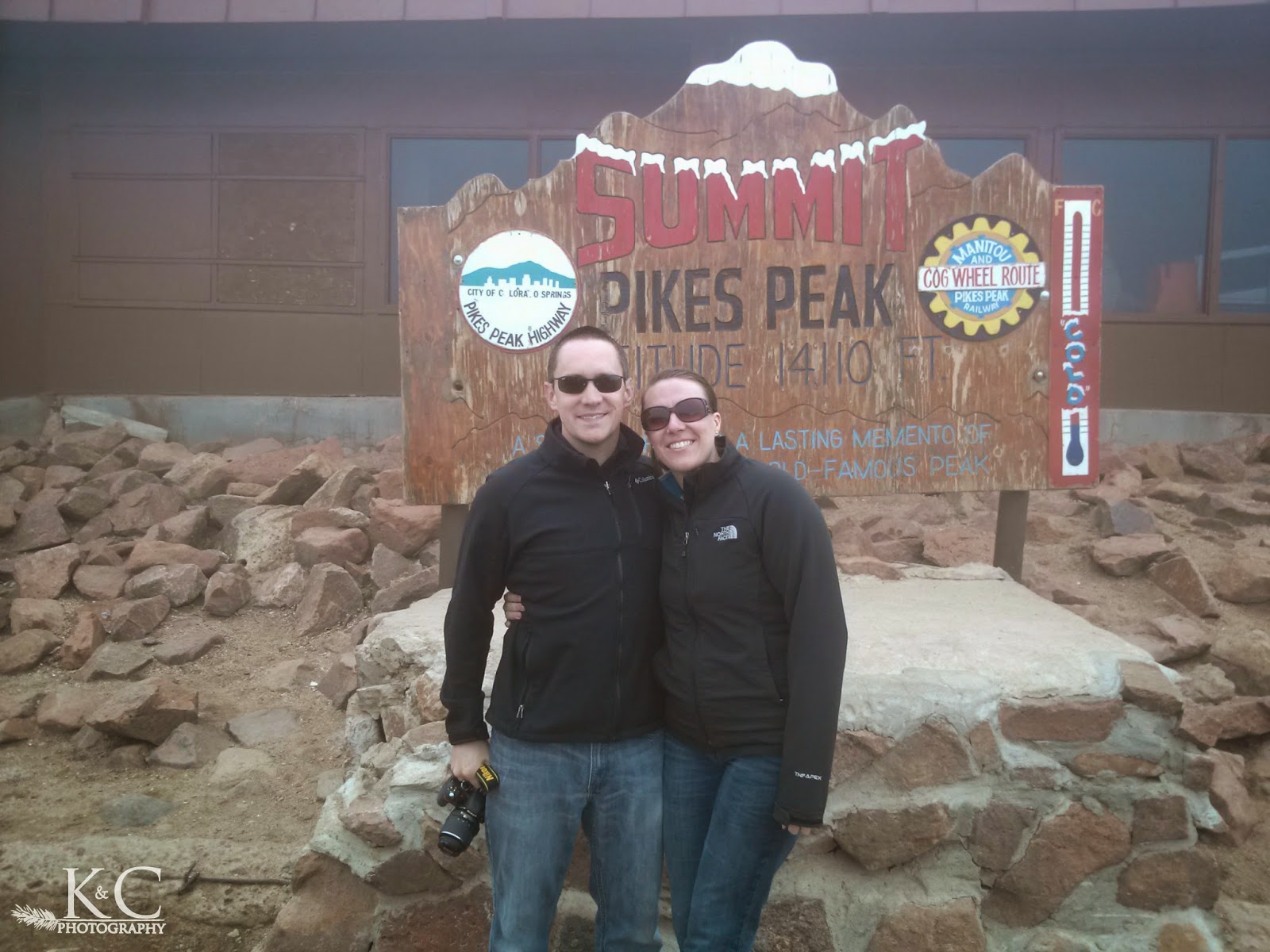 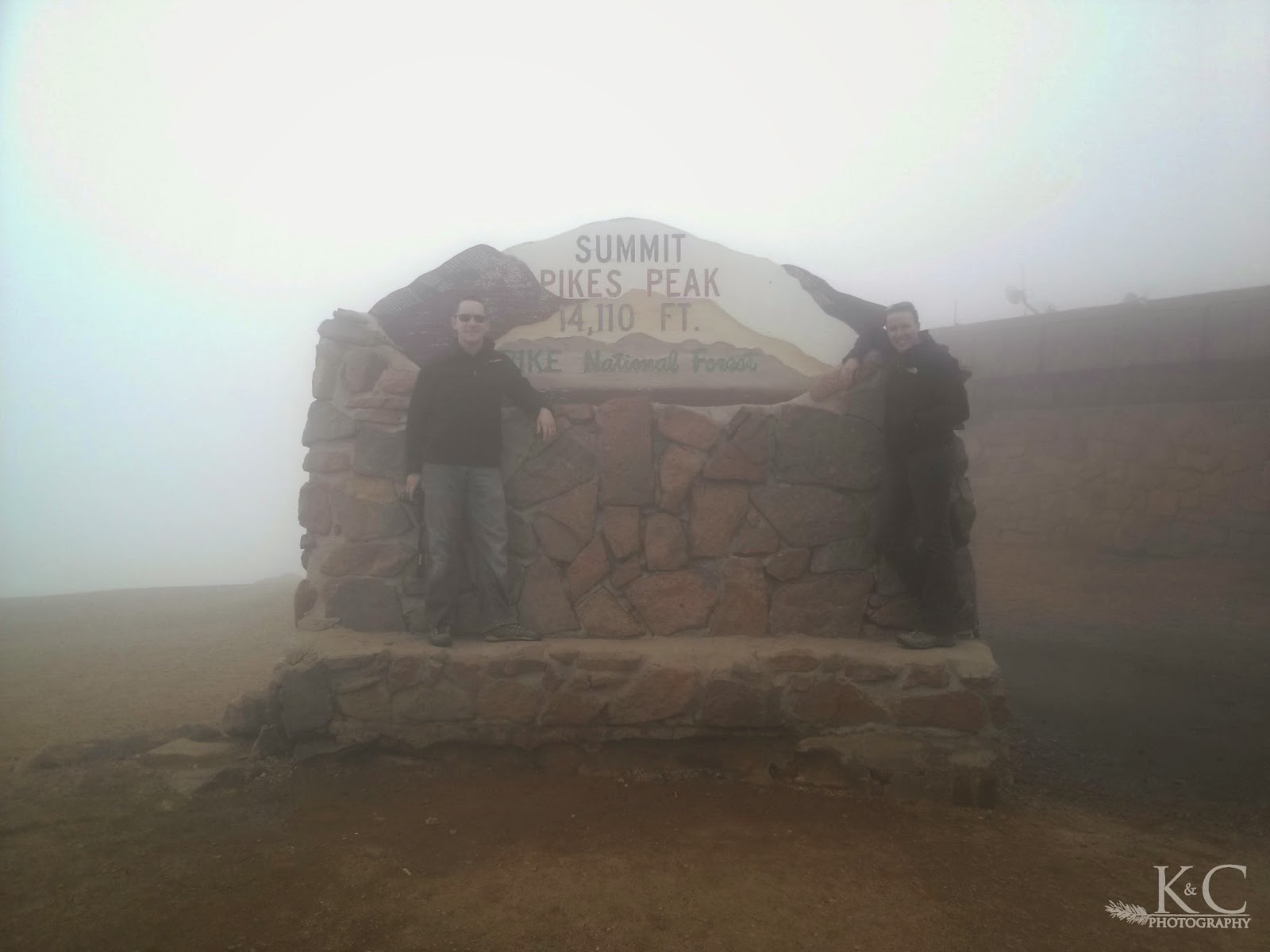 Who: For anyone who’s interested, just choose the method of reaching the top that’s most suitable for you, and make sure to be mindful of the effects of altitude.

What: Pikes Peak, America’s mountain. 14,115 feet tall!
Where: Colorado Springs, Colorado
When: Open year round depending on the weather. Come prepared and dress appropriately!
Why: Because it’s another one of America’s incredible places. There are also a number of events that take place on the mountain, including a marathon and a car/motorcycle race!
How: Drive your car up the Pikes Peak Highway (for a fee), hike the Barr Trail, or take the Cog Railway (for a fee) to the summit.
Share the Adventure:

Roxborough State Park is located just southwest of Denver. We were able to jet over there after work one evening and get a hike in before the park closed. We had looked at a neighborhood nearby since we’re currently starting our home buying search, and although those houses have amazing views, they are wedged in…

We actually made it to two Renaissance Festivals this year, the one in the Denver area as well as the one in MD. We had been going to the MD Renn Fest for the past several years, but since we had moved away, we were really excited we’d get a chance to go again anyway….