Cheyenne Mountain Zoo has to be one of the best zoos we’ve ever been to. Here are 3 reasons you should make this one of your next must see zoos.

Cheyenne Mountain Zoo is built on the slopes of a mountain in Colorado Springs, CO. This is so unique and different than we’ve experienced elsewhere. So not only are you seeing neat things within the zoo itself, but you look one direction and see the mountain and the other out over the city and plains. You can also see some of the animals and exhibits again from above as you climb higher, such as the giraffes down by the entrance. We thought it might be harder to walk up and push the stroller, but it wasn’t bad. Each switchback is steeper but then the path is pretty flat again along the exhibits. There is a shuttle if you want to pay for a ride.

Another way to see Cheyenne Mountain Zoo is via chairlift. You can purchase a ride and see the zoo from above as you take a round-trip ride up and down the mountain. Another thing I noticed, is because you are weaving up through the side of the mountain there are a lot more trees and a lot more shaded areas than in most zoos. I greatly appreciated this! 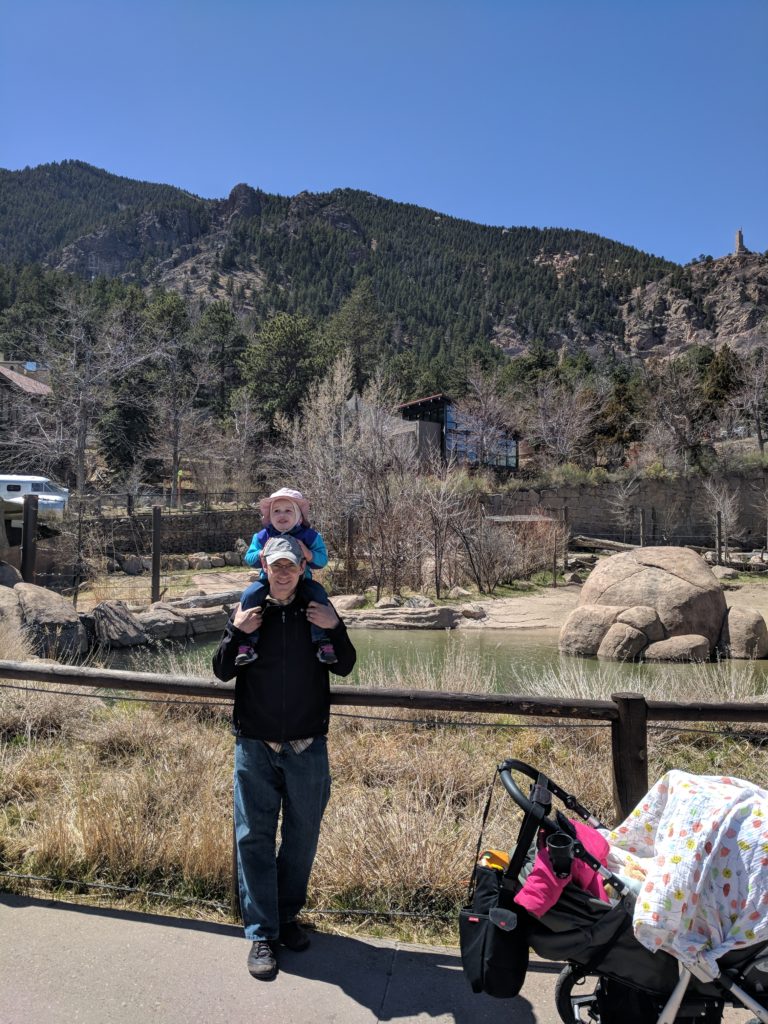 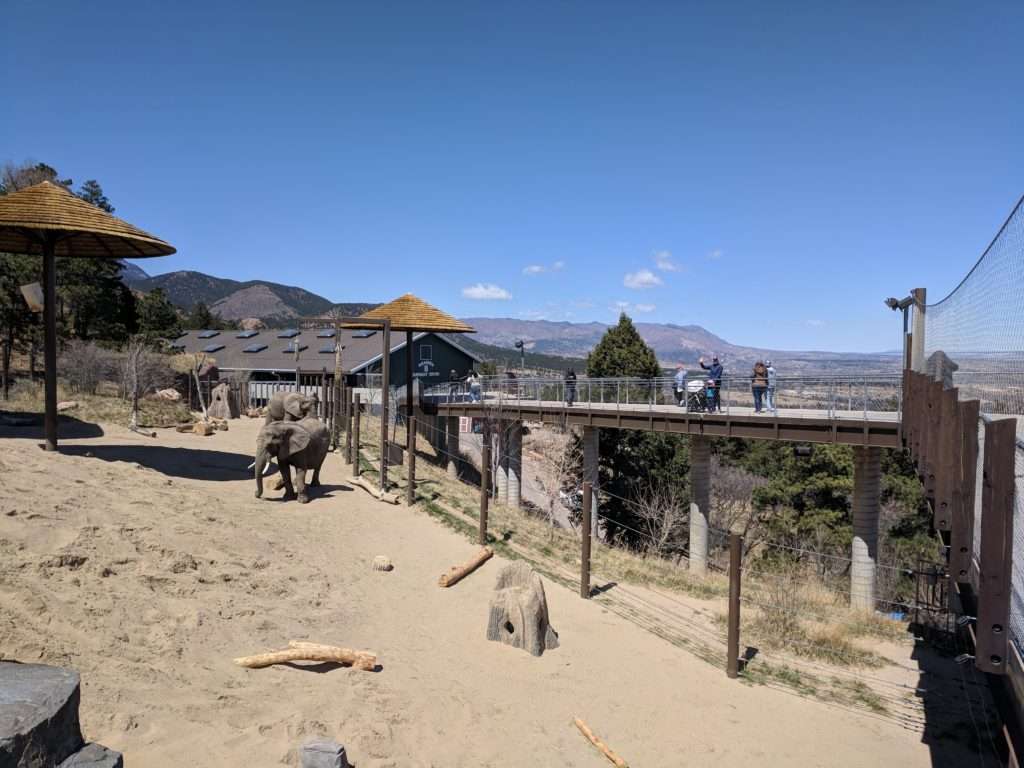 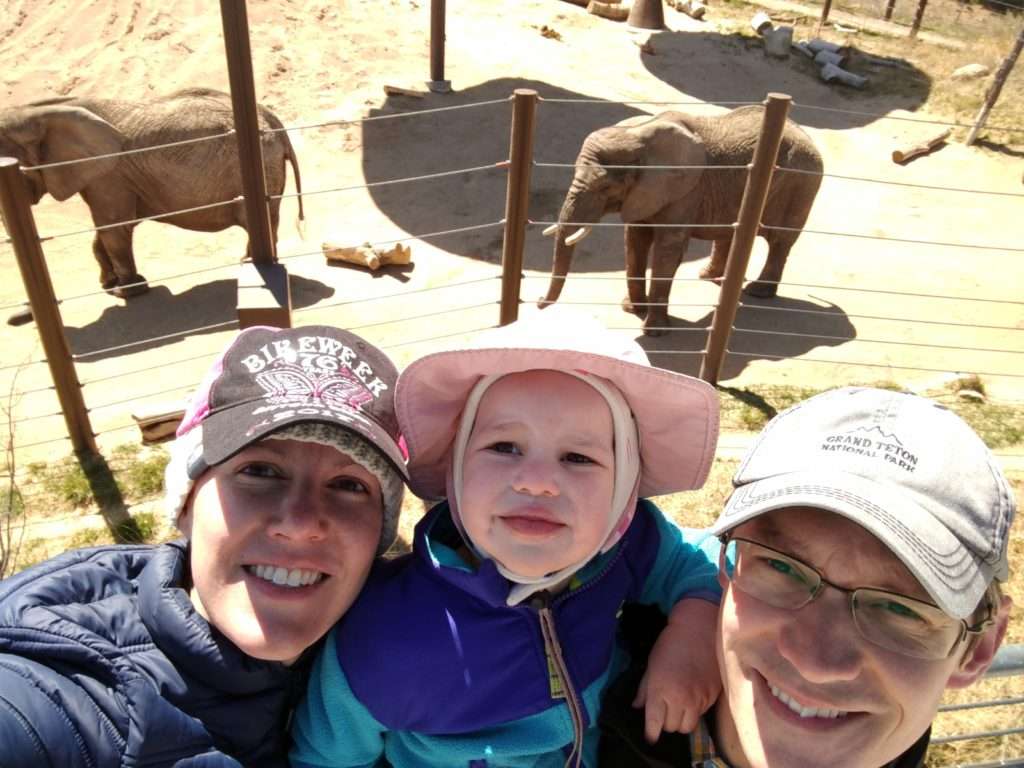 Though it’s a smaller zoo and they might not have every type of animal you might find at other zoos, they have the main ones and a great variety. Not only that, but the animals seemed especially active. Their enclosures were really well done. It seemed the animals did a lot of interacting with the things in their enclosures. They seemed to have good environments to live in. Most of the animals were moving around or at least awake and in good view.

The thing that was most exciting for us and the kids though was how close you could get to the animals. Cheyenne Mountain Zoo really does a nice job of this. You could feed and pet the giraffes while walking along the boardwalk at their head level. You could go into a bird house and for $1 buy a stick with birdseed on it. K was over the moon about this. We walked down a path with wallabies hopping through the grass on either side of us with no fence between. And at lunch there was even a chicken stalking about. It was obviously hoping the kids would drop something! 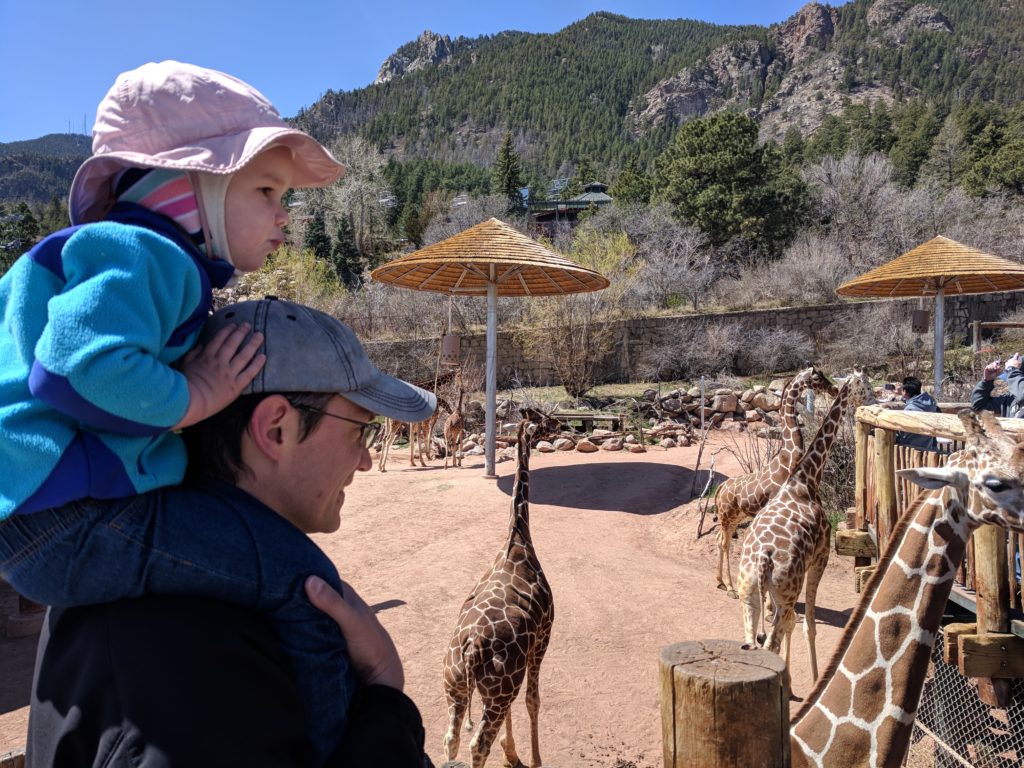 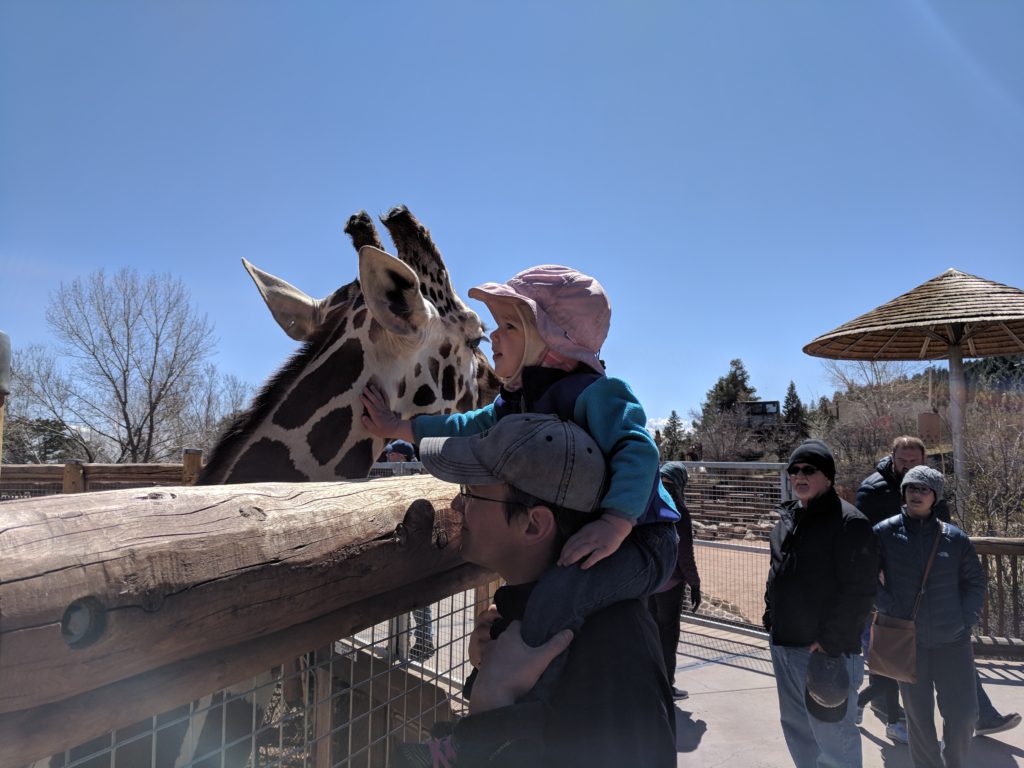 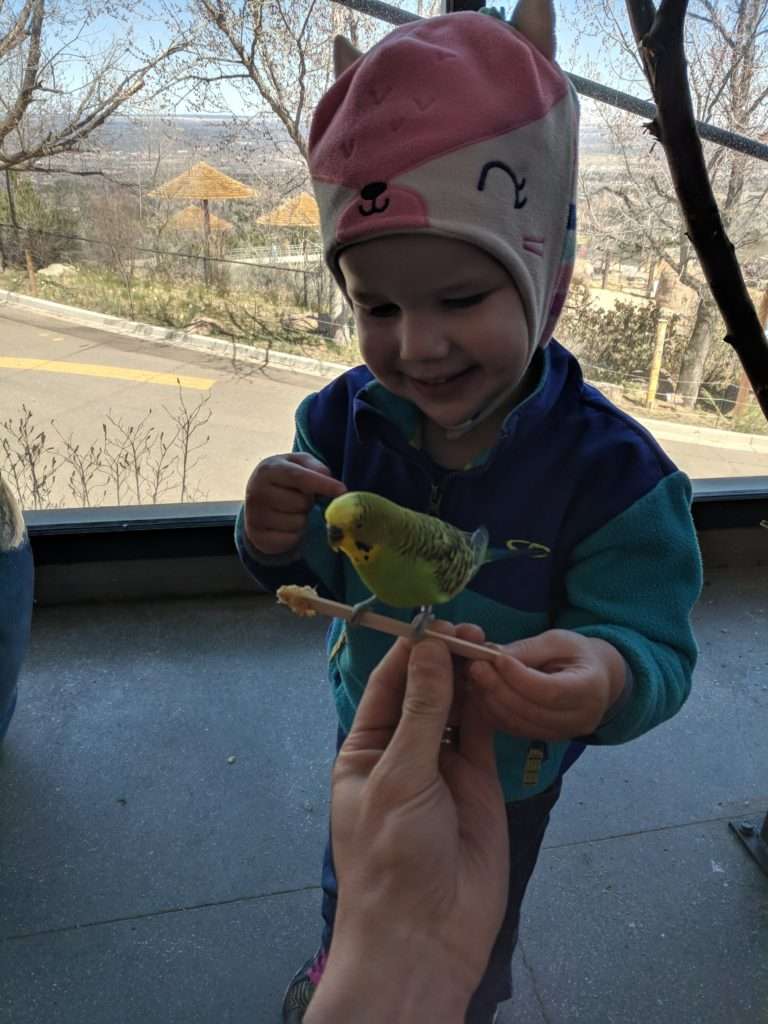 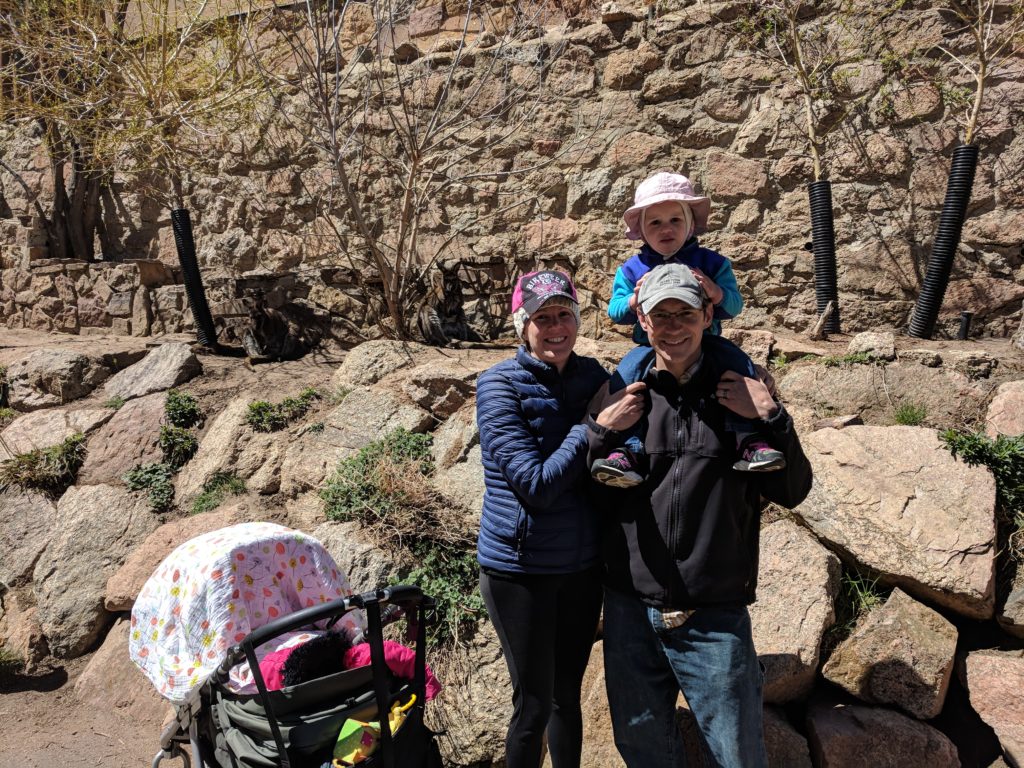 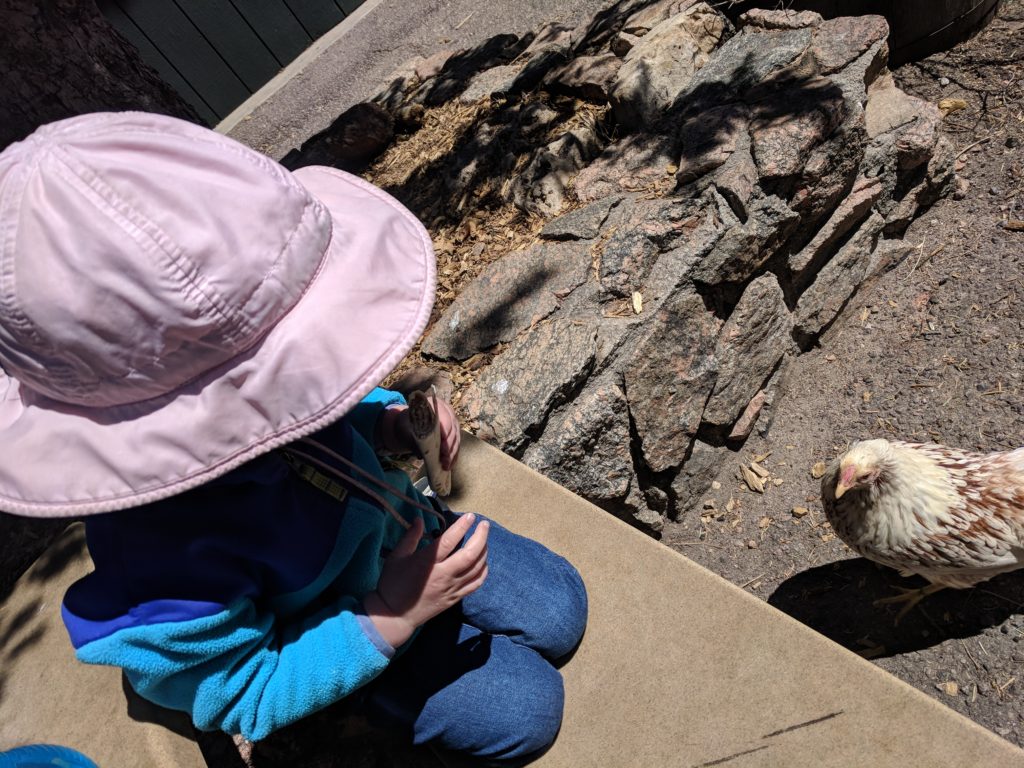 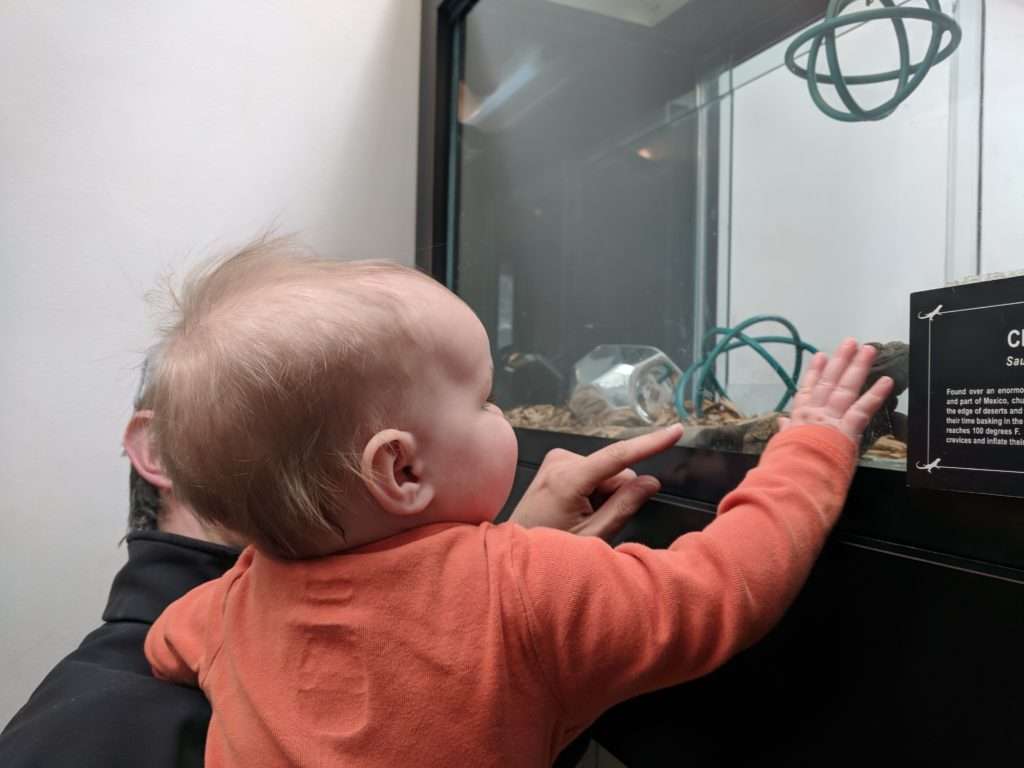 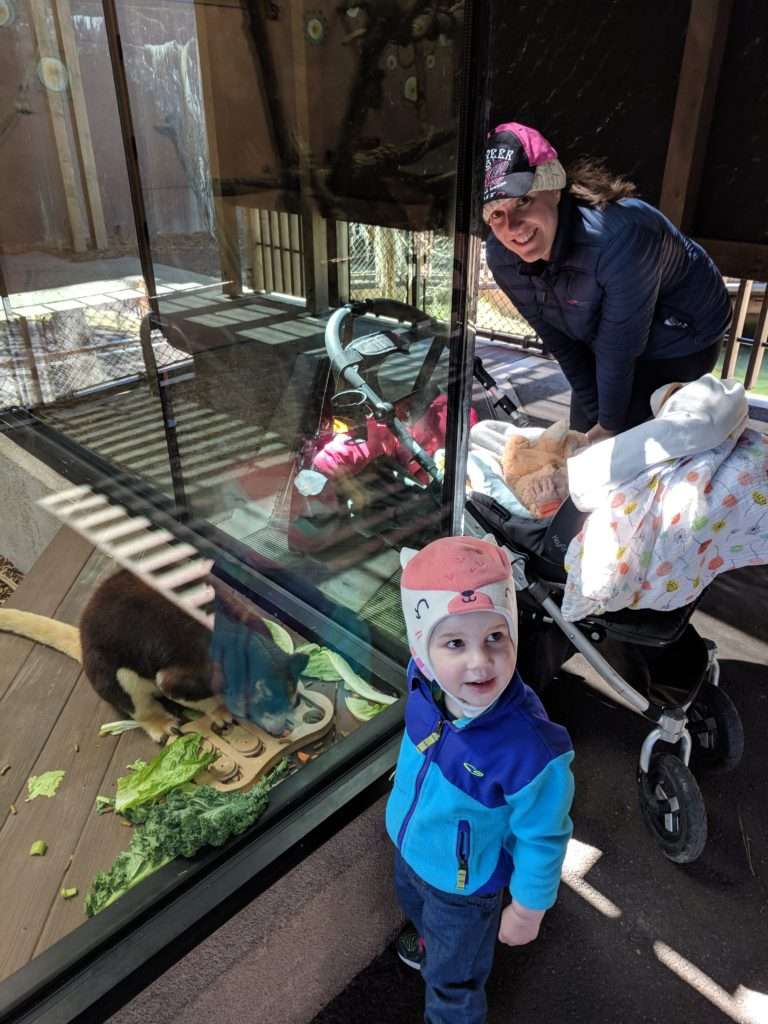 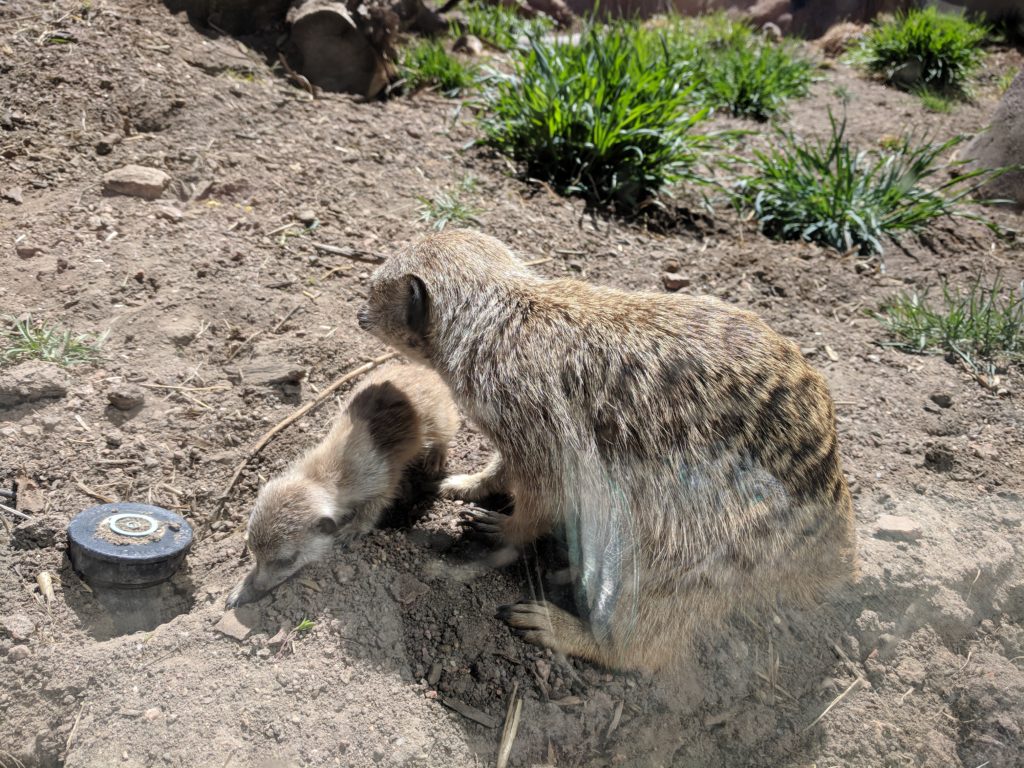 3. The animal feeding, training, and other keeper demonstrations

Throughout the day there are several times when zoo keepers do various demonstrations. We saw so many signs about this throughout the zoo. It would be fun to come back and see more of them. In the end we caught two of them while we were there. The first was that the wolves were fed while we were looking at their exhibit. A bowl of food was put right by the glass so one of the wolves came up and ate right in front of us. Later on K got to sit with a bunch of other kids and watch a couple of skunks let out of their crates to walk around and listen to the keepers tell the kids about them. 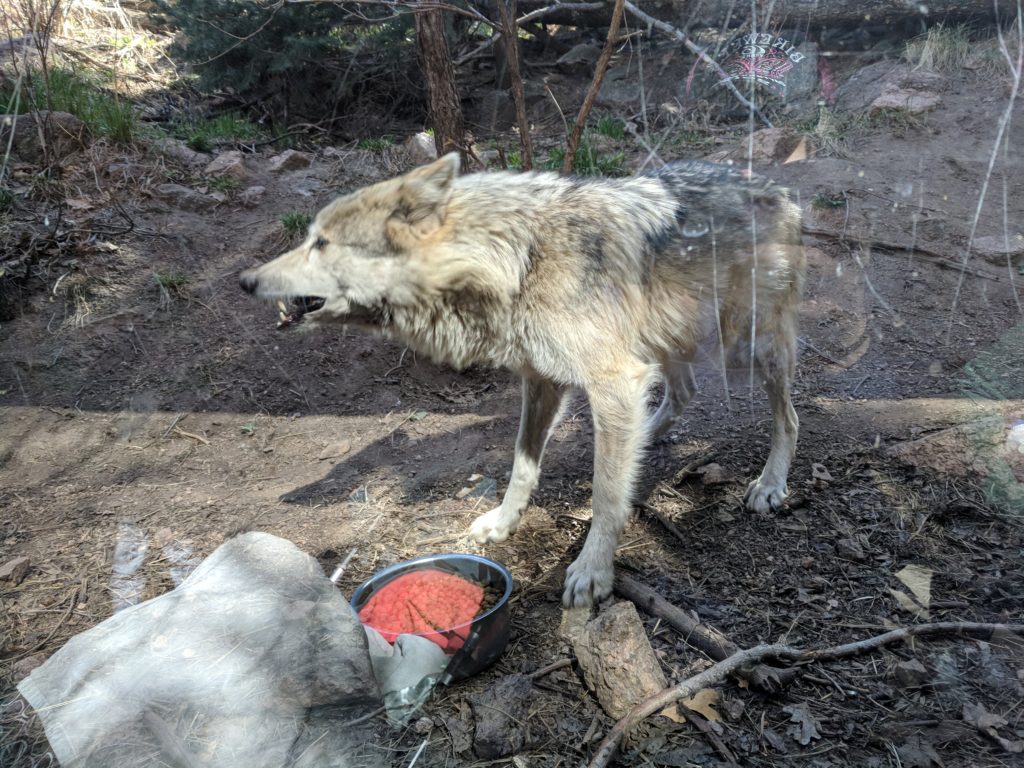 The next show we saw was even better. At the grizzly exhibit, we were already super excited that the bears were so active. They were seriously splashing around in the water and playing with a log. Then it got even better when the trainer came and showed us what the grizzlies did and did not like to eat. Surprisingly the grizzly would make it very clear he did not like cucumbers. He even found the cucumber hidden in a meatball and spitting it out. The grizzly had learned to interact with the keeper and we learned a lot about grizzlies. K was only about 5 feet away from the grizzly during all this, of course behind a gate. She thought it was great! 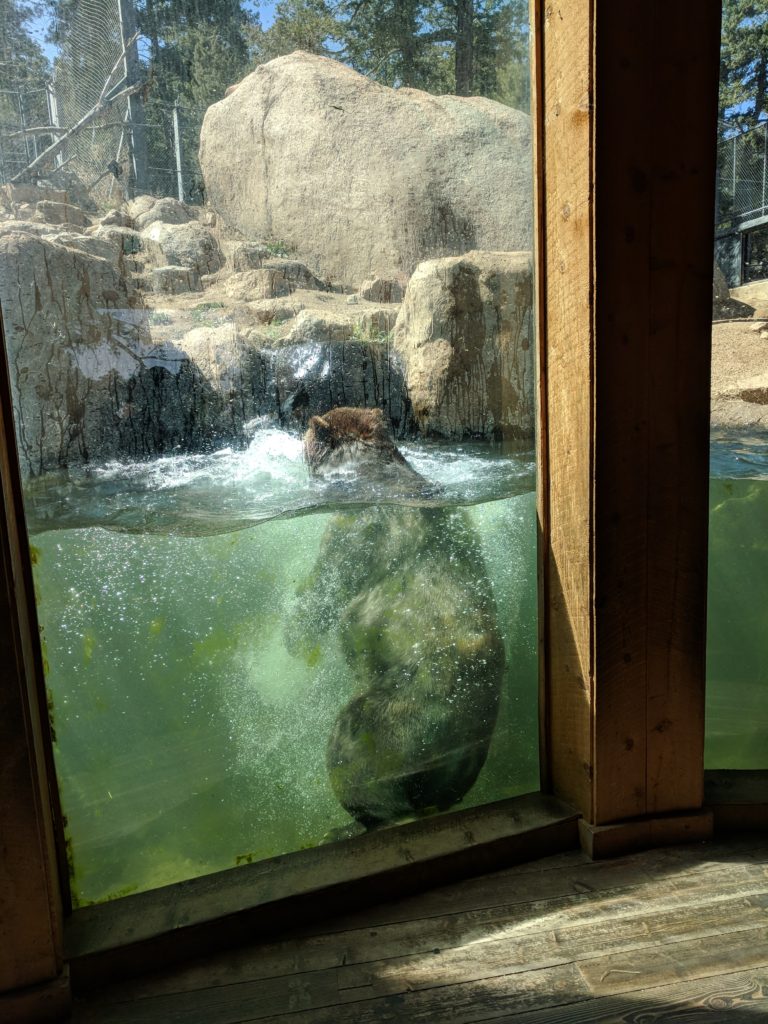 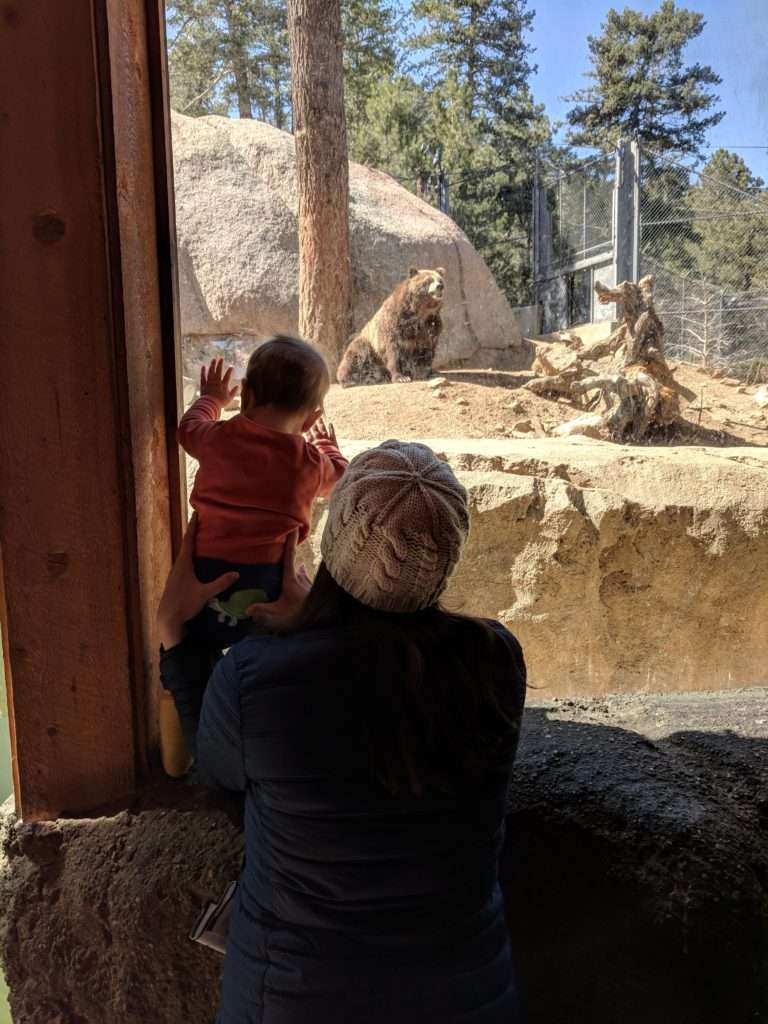 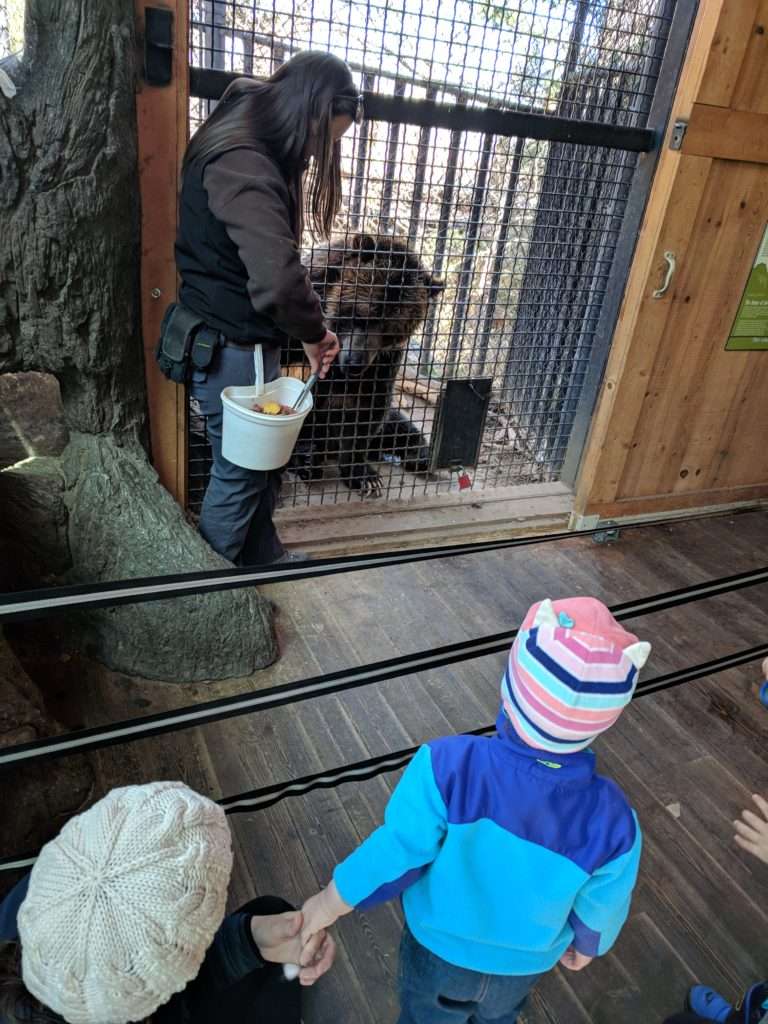 I bet the rest of the demonstrations are just as great. If you want even more, there are special animal encounter sessions you can book for yourself or your group. Though other zoos have plenty of shows as well, these felt more intimate and up close. In addition to these formal demonstrations, we saw a lot of zoo keepers wandering around, keeping an eye on things. They would offer tidbits of information about the animals we happened to be near.

There is so much more going on at Cheyenne Mountain Zoo than I mentioned such as driving to the top of the mountain through to zoo to the Will Rogers Shrine of the Sun, the carousel, special zoo events, and more. For more information check out their website at http://www.cmzoo.org/. We previously wrote posts about the Denver Zoo and the Denver Zoo Lights as well. 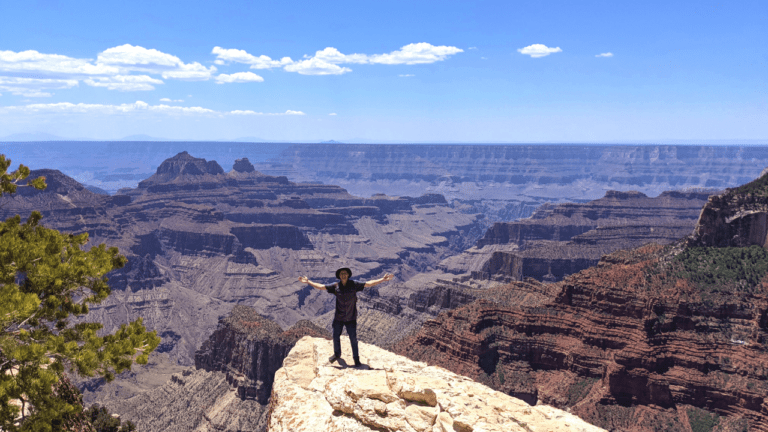 Any trip to Grand Canyon National Park is bound to be a good one. Unless of course you get locked out after just a couple of days. That’s exactly what happened to us back in 2013 when we were visiting the south rim and the government shut down. All National Parks were closed for about…