We are happy to report that back in January we made it through potty training with our oldest and came out the other side mostly unscathed. Remember when we announced her birth? Time flies! It is wonderful to have one less in diapers though. We’re looking forward to when N is potty trained too! Here is how we went about it.

I started by doing a bunch of research online and talking to some friends about the methods they’d used. In the end I decided on the 3 day method. That seemed the best for our family both in terms of what we thought K would respond best to and what Kevin and I felt we could get behind. We didn’t want it to drag on and on if possible.

Thereafter I compiled notes from the research and sources I received from friends so that we had a checklist of things to buy and steps to follow. We bought bulk size M&Ms to use as rewards and salty goldfish for snacking and to encourage thirst. I bought various drinks K doesn’t usually get much of, like juices and made sure we were stocked up on milk so that she would need to frequently use the bathroom and get a lot of practice.

I went to the library and brought home various books and DVDs for kids about using the potty as well as a ton of other new and interesting books. These would help pass the time while potty training over the 3 days.

It is important to note that we felt K was ready. We had introduced a little potty months before so she could sit on it when she wanted. We started by asking her if she wanted to use the potty and taking her when she said yes. This didn’t happen often, so we then just started taking her to use the potty before and after nap time and bedtime as part of the routine. She would get a big sticker as a reward when she went or a little one for trying and could put them on a potty chart we made for her. Once that was normal we thought she was ready for full on potty training. 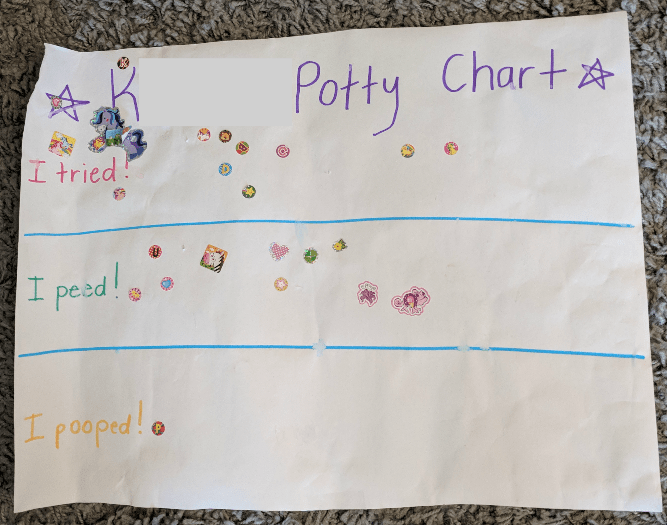 Then it was time to kick off potty training. We set aside a 3 day weekend at the end of January. We repeatedly told K the day before that the next day we would start her “Potty Party.” We showed her the snacks, drinks, DVDs, and books. First thing in the morning we had a special pancake breakfast, put on our Potty Party crowns, and danced around. She was excited. Then it was time to begin!

We removed the rug from our living room and set the potty in the middle of the floor. K could also sit on her little plastic chair without making too much of a mess if she had an accident. We made sure she was drinking and snacking when she wanted. Then we passed the time watching shows and reading books.

Remember to let us know if you have to use the potty.

Pee and Poop go in the potty.

Remember to listen to your body. (Thanks Elmo)

If you have to go potty, stop and go right away. Flush and wash and be on your way! (Thanks Daniel Tiger)

We can take a break (from reading / and pause the show) and use the potty.

So sometimes she used the potty when the timer went off, but often by reminding her to tell us she actually became very good at that and would just run to the potty when she needed to go. Every time she went she got an M&M as a reward. There were a few accidents here and there but then we just said “Oops accidents happen. Remember pee and poop go in the potty.”

Day 1 she wore nothing from the waist down and we didn’t leave the house. Part way through Day 2 we added pants. That day we went out once and we took the potty along but didn’t need it. We just walked around the apartment complex. Part way through Day 3 we added underwear under her pants. The reason for doing Day 2 and 3 in that order was that I had read some kids will treat underwear like a diaper if added too soon. On Day 3 we went out twice around the apartment complex.

Originally we thought we might keep diapers for sleeping and night train later, but K was so into the idea of no more diapers during those 3 days that she didn’t want them at nap or night time anymore either. We definitely lucked out.

I had read that learning to poop in the potty can be challenging for kids. They’re so used to going into the diaper that letting it fall away into the potty can feel like their insides are falling out. And that can be quite scary. So we tried to be especially understanding and encouraging. We had to keep an eye out to make sure she didn’t try to poop in her pants. For a while there she would have a tantrum about us insisting she use the potty. We just kept trying and kept saying things like, it’s ok, just let it out. She’d try standing or leaning on us as well. It was always a huge celebration when she succeeded. Eventually with practice this too became easier.

After that intensive potty training weekend though she was done with diapers and was using the potty exclusively, we still had to help remind her here and there. For a while she would still get a goldfish as a reward for using the potty, until she just gradually stopped asking / forgot about the reward.

We would put the little potty into the car when we went out, so that we could pull over and let her use the bathroom if she had to. Over time that happened less and less as she got better at holding it or timing it. It’s still nice to have the extra potty along too because sometimes public bathrooms are just gross.

It also took a while for her to use the big potty, even with the little potty seat we got her. This one is great because it’s integrated into the main seat. The thing that did it was a friend coming over and K seeing her daughter use the big potty. Then K wanted to too! Funny how that works.

Sometimes accidents happen overnight still but that’s really the only lingering thing. By regulating her liquid intake in the evening and then getting her up at night to go once if there’s any question, we minimize how often it happens.

If you’re a parent reading this then I hope you get some ideas for potty training your own kids. If you’ve already been through this, leave a comment with any helpful tips you discovered!

We found out we were expecting a baby back in November and have been super ecstatic since. This is the announcement we put up on Facebook. We thought using gear was fitting for two climbing enthusiasts. I suppose it’s possible our baby won’t grow up to be a climber (there’s also caving as well!) but…

Hello! It has been ages since we have posted an update here… Life’s adventures certainly haven’t stopped, we just haven’t reported on them in a while. Update We are, of course, still in the Denver area. Since our last post I resigned from my job (yet again) to start my own business which is coming…

We recently adopted a local shelter dog who has made herself at home with us and fits right into the family. Her name is Maggie, which is short for Magnolia. This is the name that she came with, and because she responded so well to it and we couldn’t think of anything we really preferred,… 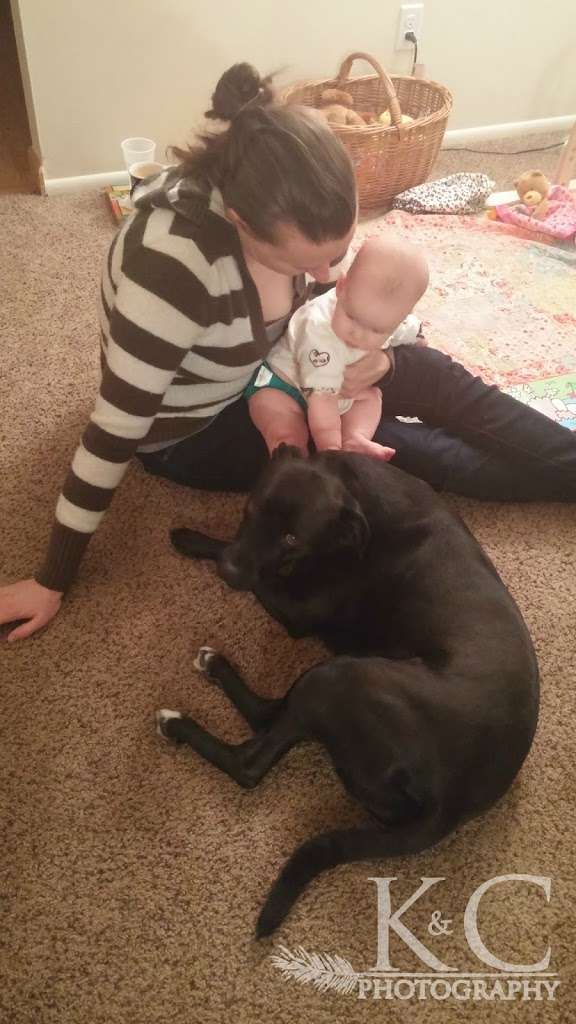 Things really started getting fun when lil K actually noticed our dog Maggie. Before that Maggie would walk by, jingle her collar, smell the baby, and lil K was oblivious. Then she started following the dog with her eyes and smiling. Now she is watching, giggling, reaching, holding her arms out to and petting the… Since baby girl’s birth we’ve been blessed with visits from many loved ones. Family and friends have come to visit and meet baby K, and get lots of baby cuddles. It’s nice to have visitors to provide encouragement, and help around the house. It’s been a steep learning curve, exhausting and frustrating at times, but…

A friend of ours recently sent this quote. It is really true, don’t be afraid to do what makes you feel alive. The benefits reach further than just to yourself; it can impact how you live your life and how you impact others! “Don’t ask what the world needs. Ask what makes you come alive,…