Our trip to Crested Butte, CO launched our week long “Mountain Madness” vacation. Having not “really” made it into the mountains since moving to the Denver area, we wanted to see several of the iconic mountain towns by spending a few days in each before K started his new job and would have limited time off again for awhile.

Located just over 4 hours southwest of Denver, the drive to Crested Butte takes you past amazingly breathtaking scenery. The drive went by in a flash, not involving any interstate travel, but winding on highways through mountain vistas. One of the most spectacular by far was the Collegiate Peaks which are part of the Sawatch Range and are named for American Ivy League schools. We’ll definitely have to come back here with the trailer for some summer camping and hiking. 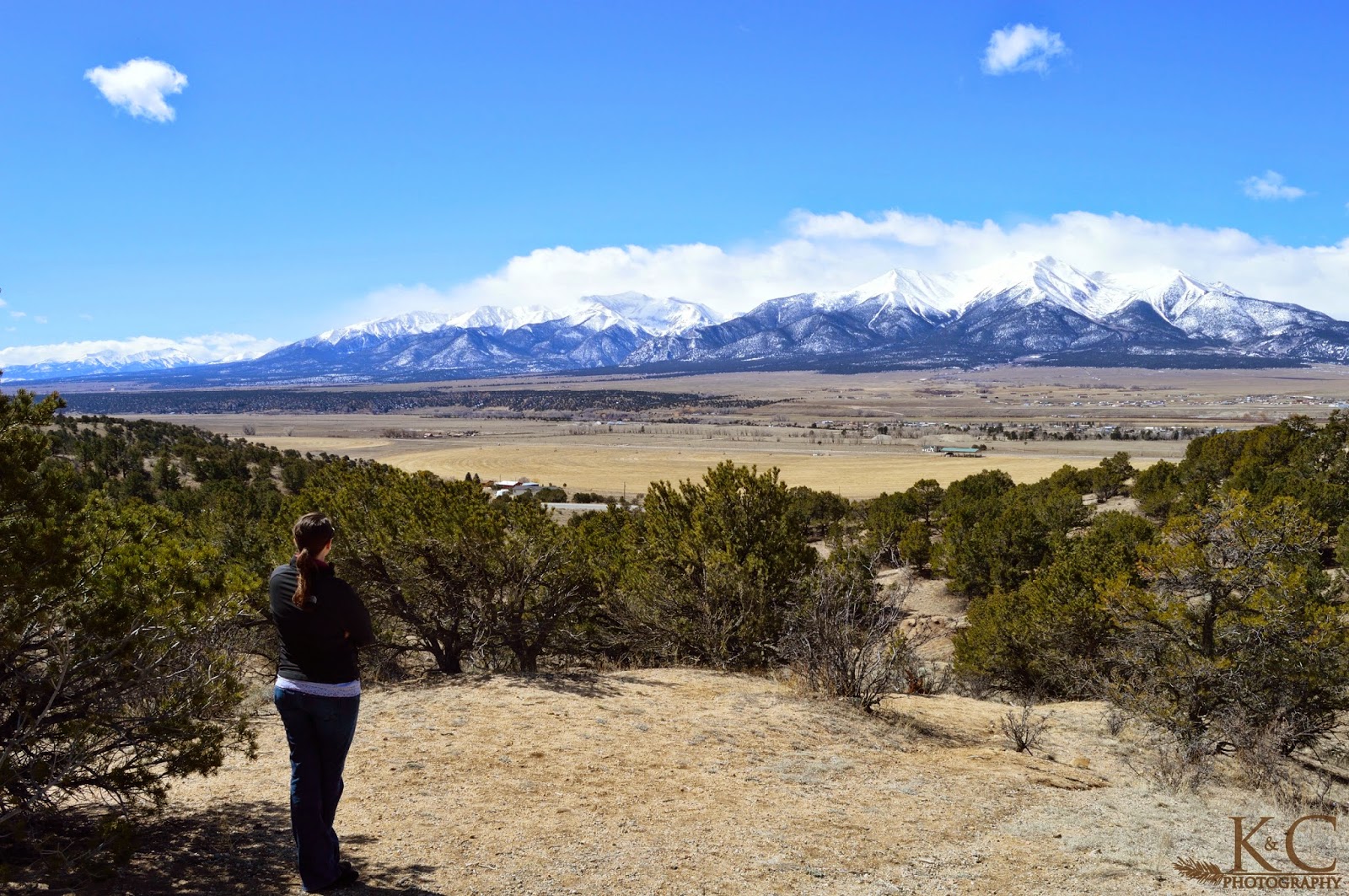 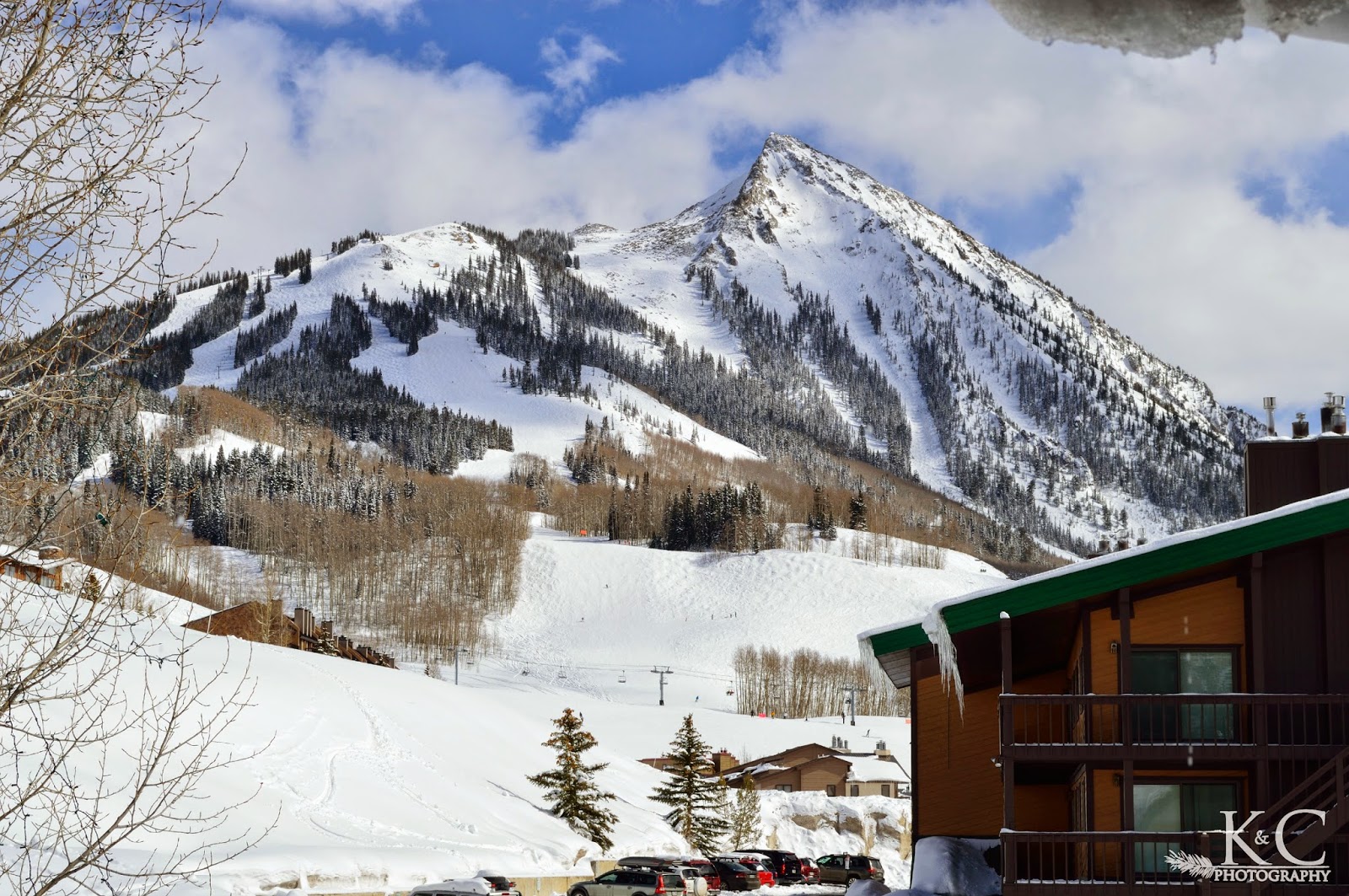 So much snow, it touches this roofline! 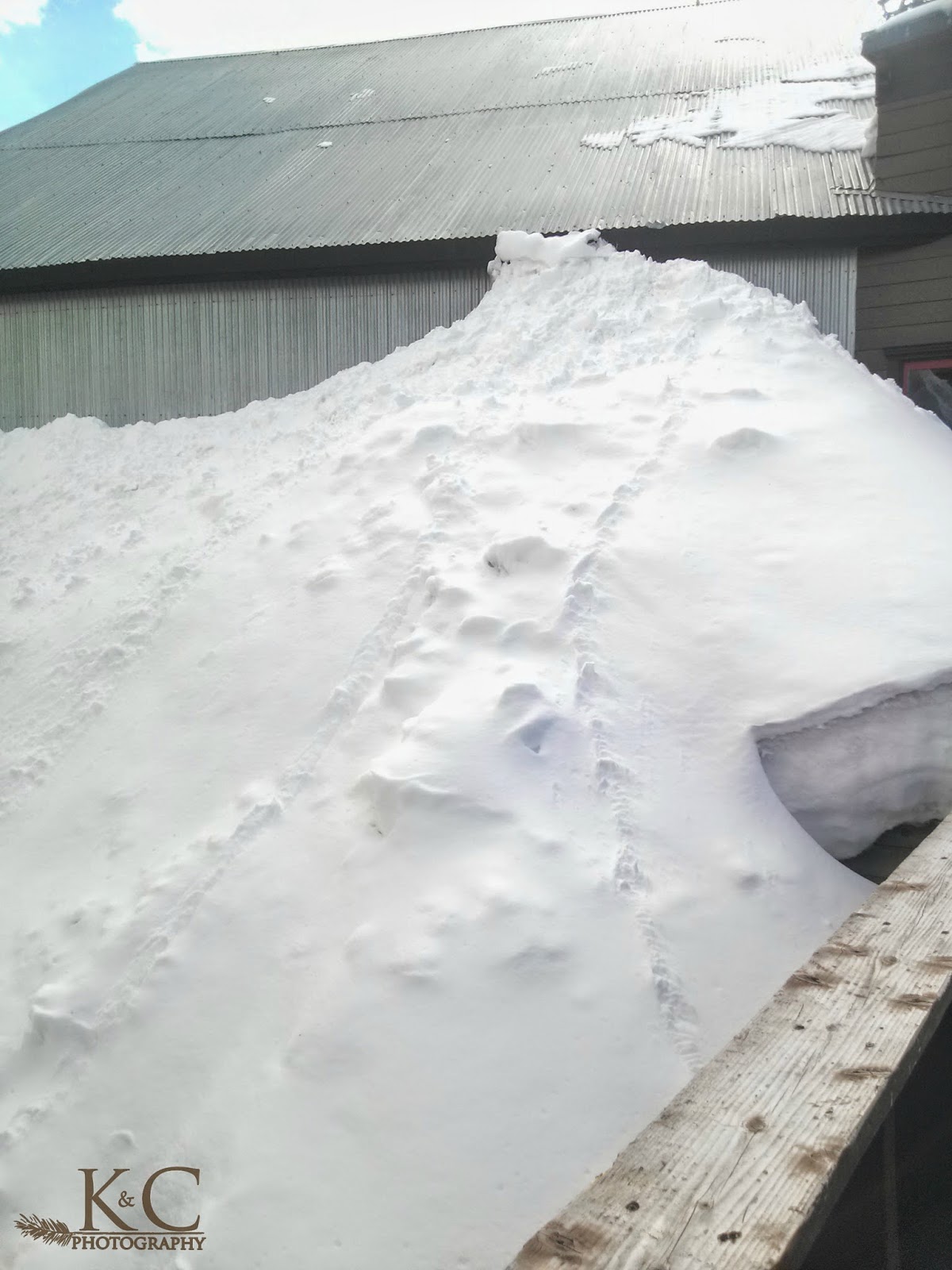 The town of Crested Butte was once a mining town and supply center and later became a ski hub. Mount Crested Butte actually sits higher and nearer the slopes and is the ski village / resort area. That’s where we stayed, in the Nordic Inn, which is nestled in and small compared to the larger hotels and condo buildings around it, but I actually felt like it had the most charm. It’s been kept really nicely updated and decorated. We felt it was an upscale mountain rustic. If you stay here, get a room on the front side of the building with a view of the Crested Butte Mountain as we did. 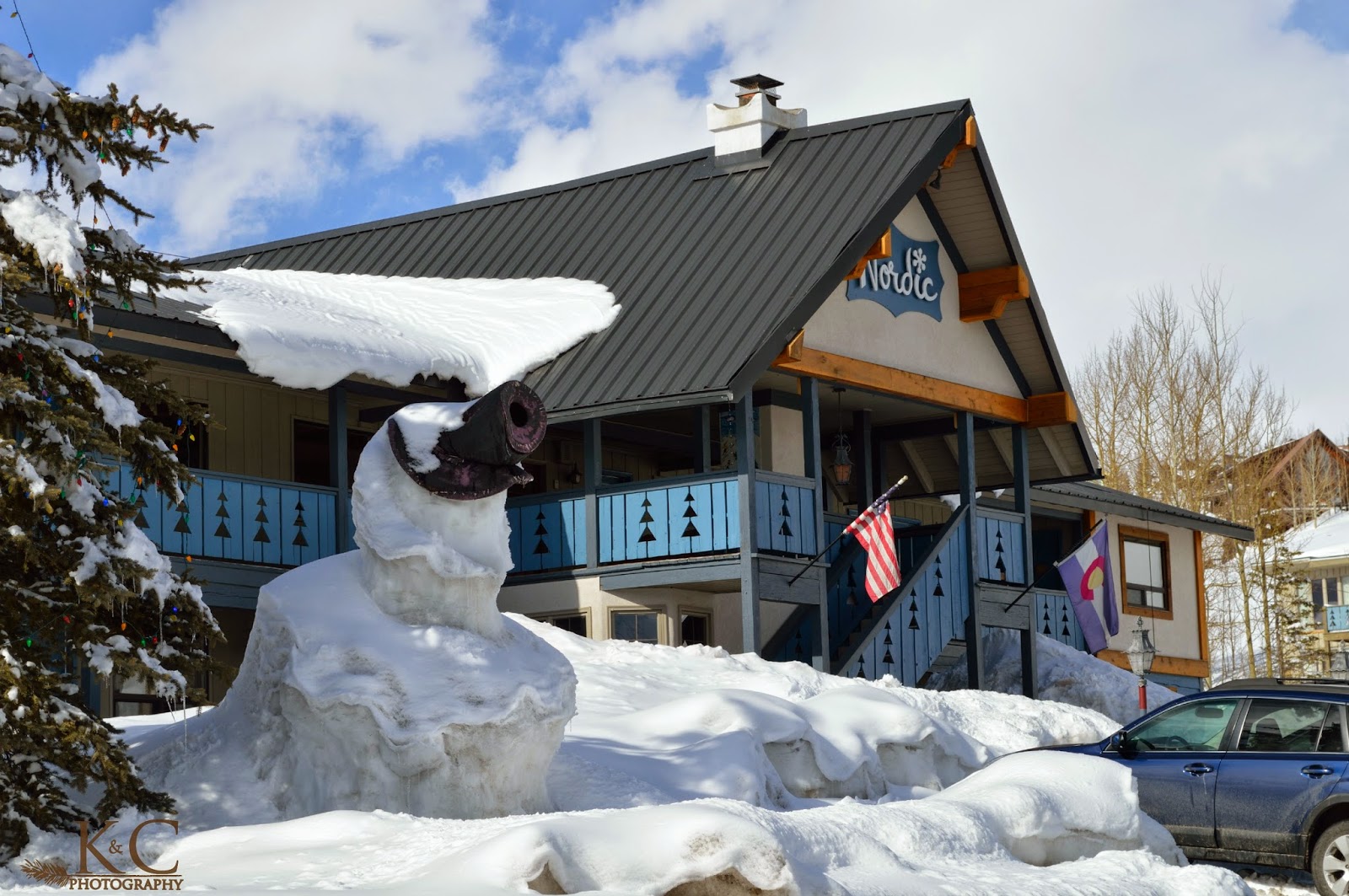 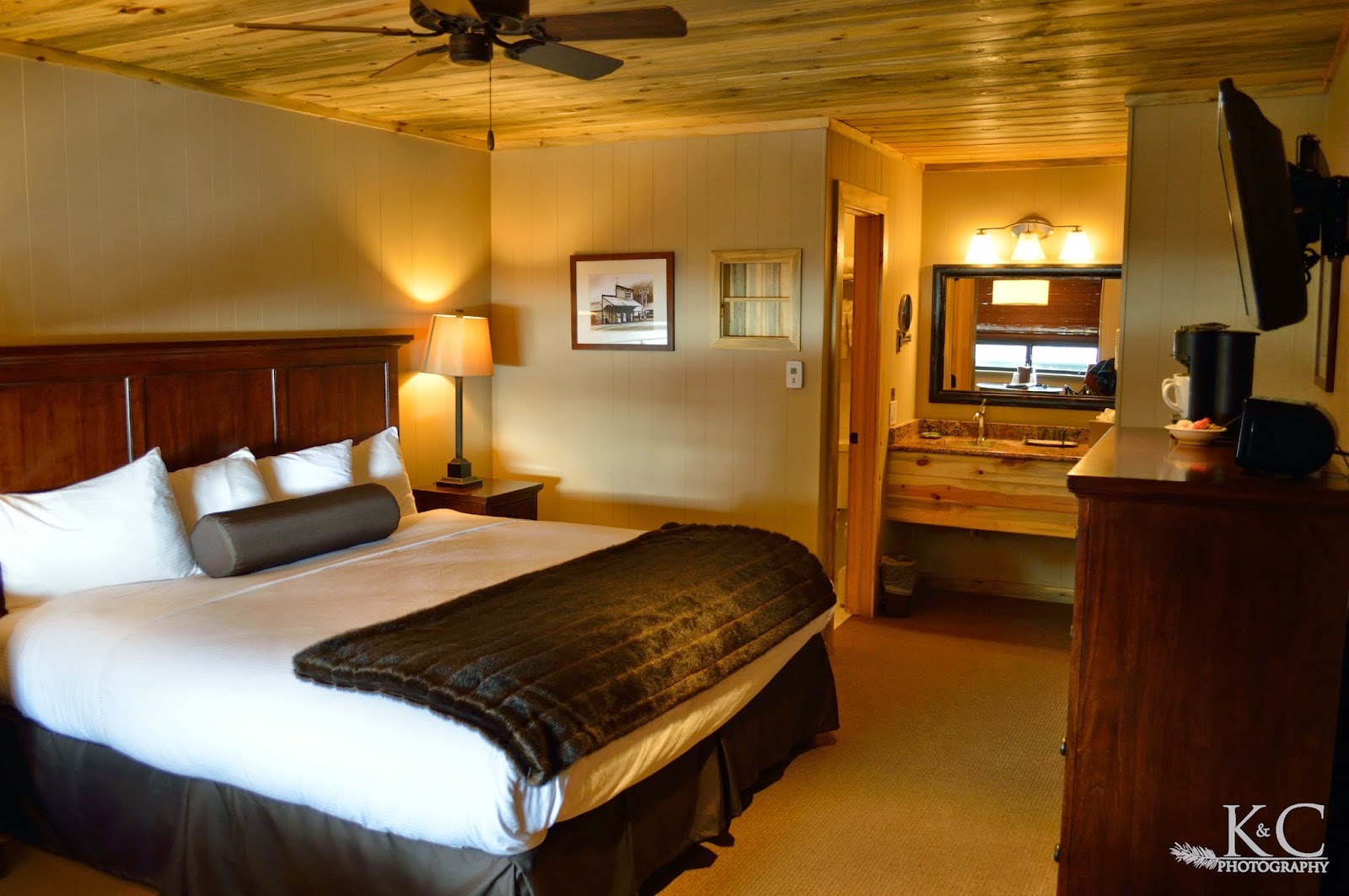 We hear the skiing here is great, and even near the end of the season it was still a popular place. A woman at a local coffee shop swore by Crested Butte as her favorite place to ski of all the CO mountain towns. We did not do any downhill skiing, but check out how our lesson and day of cross-country skiing was here. The evening we arrived was actually the start of the Grand Traverse, an annual cross-country skiing race that starts at the bottom of the slopes in Mount Crested Butte, traverses the mountain range, and ends in Aspen 40 miles later. It also starts at midnight, so shortly before we made our way out to the slopes to watch the show. It was a very festive atmosphere as the racers gathered, each wearing headlamps, and then took off up the slopes when the race gun sounded, lights eventually cresting the first hill and fading into the distance. Due to snowfall a few days before, there was actually significant avalanche danger, and so only for the third time in the race’s 17 year history did the plan change for the Grand Traverse to become the Grand Reverse and the racers turn around part way through the course to return to the finish in Crested Butte. It was also neat to be able to go online and see the progress of the racers as they each wore GPS trackers. We are definitely in awe of the skill and stamina those skiers must have to do that race! 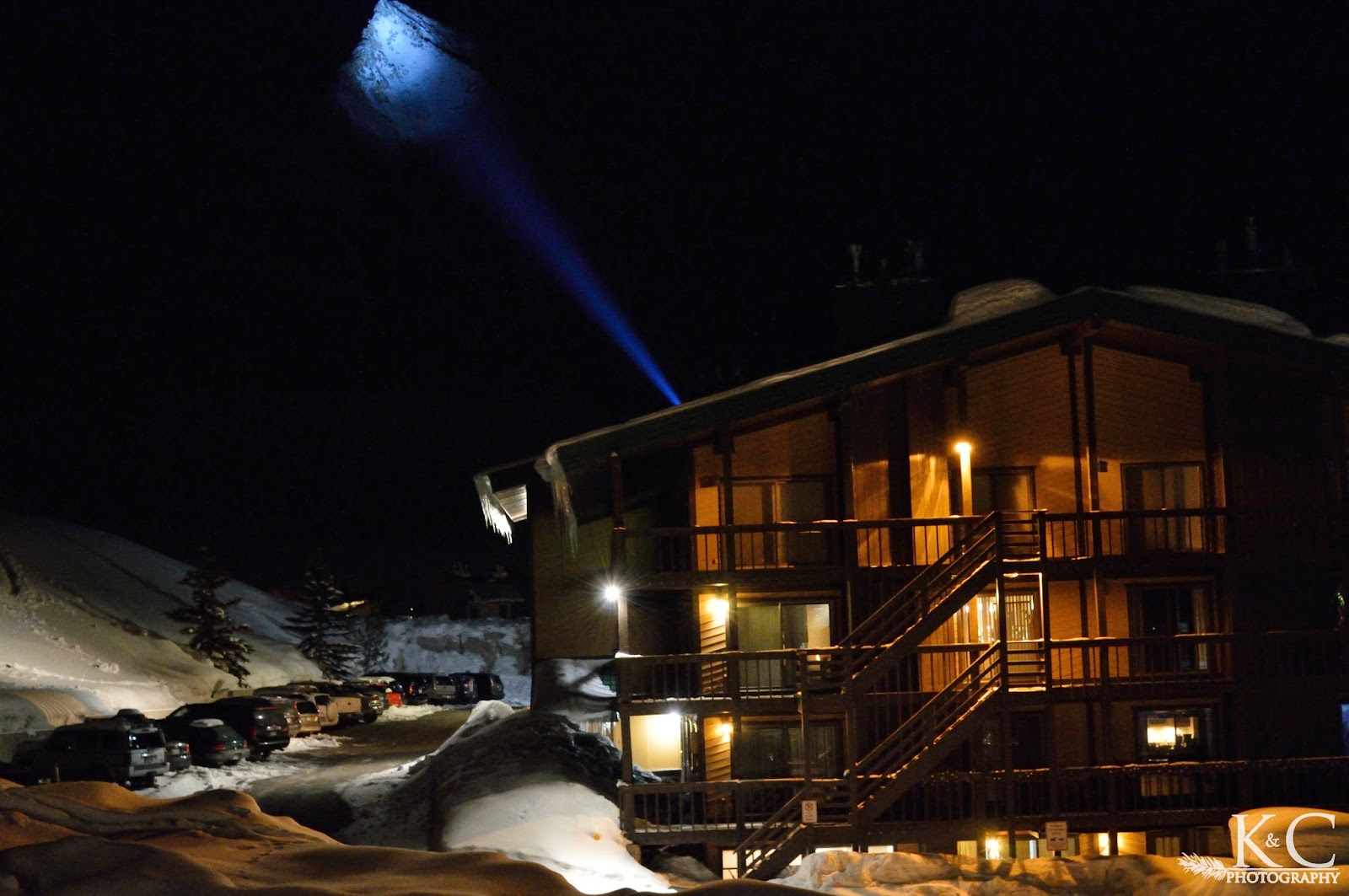 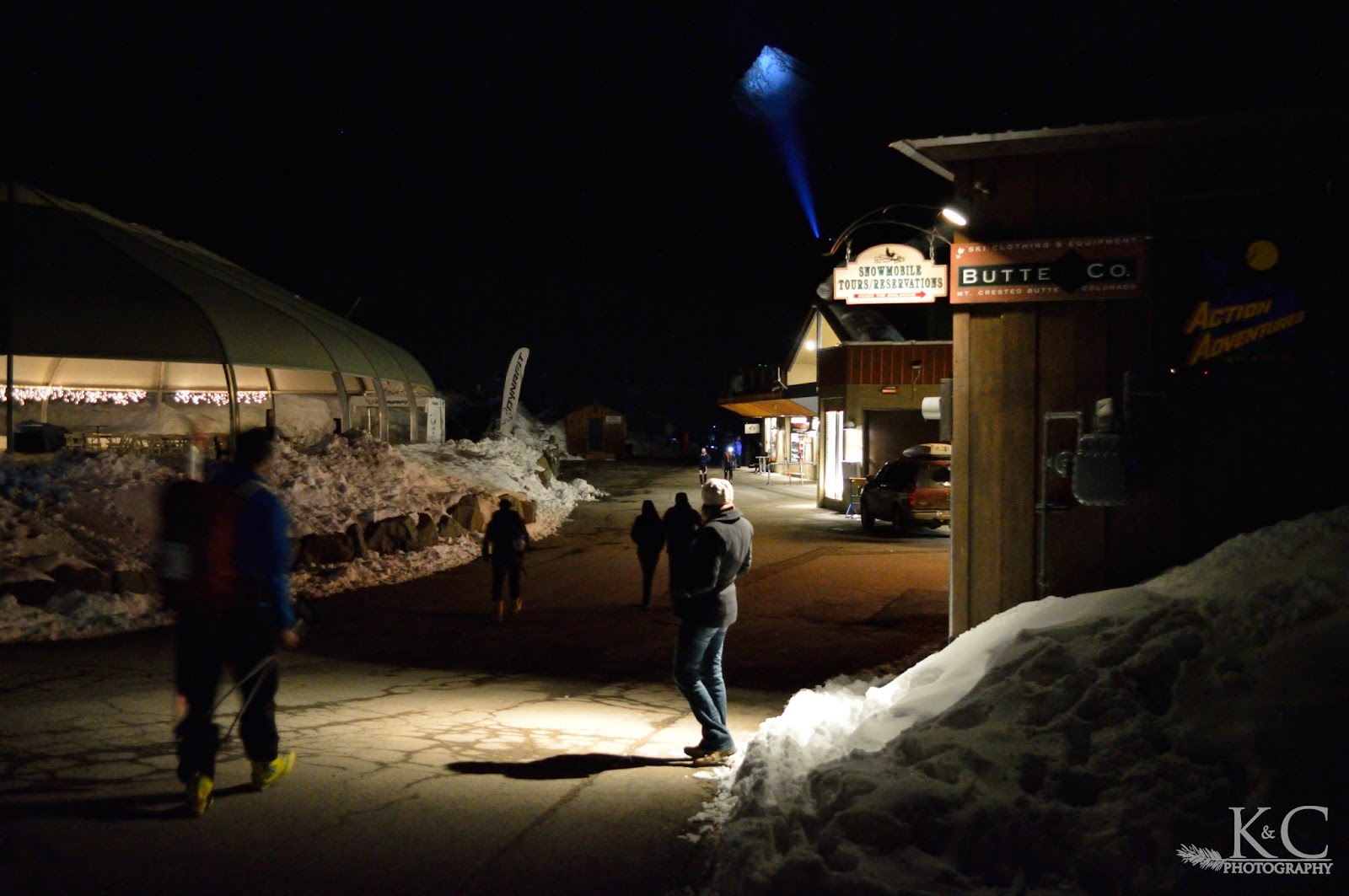 Gathering at the start line 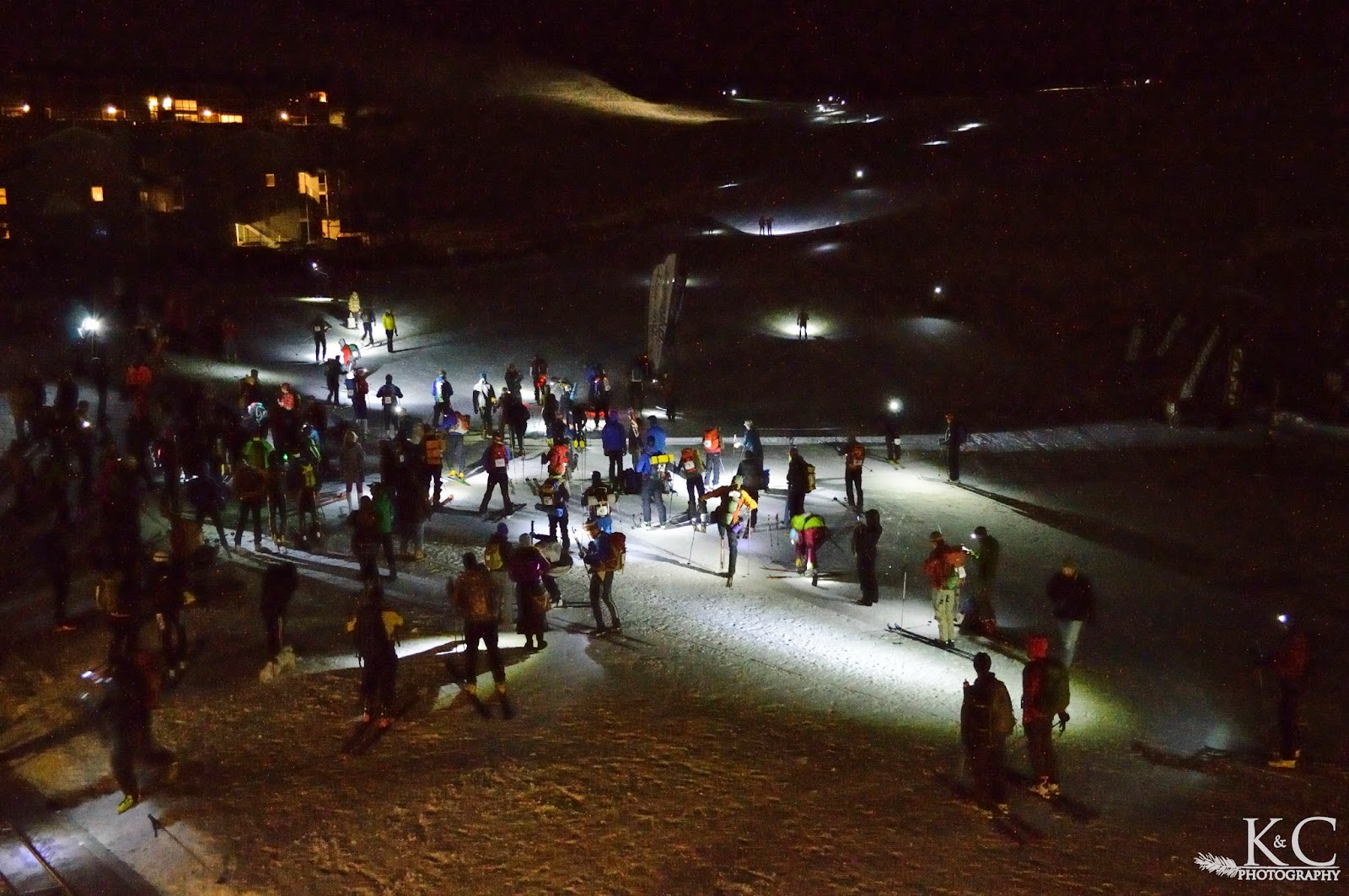 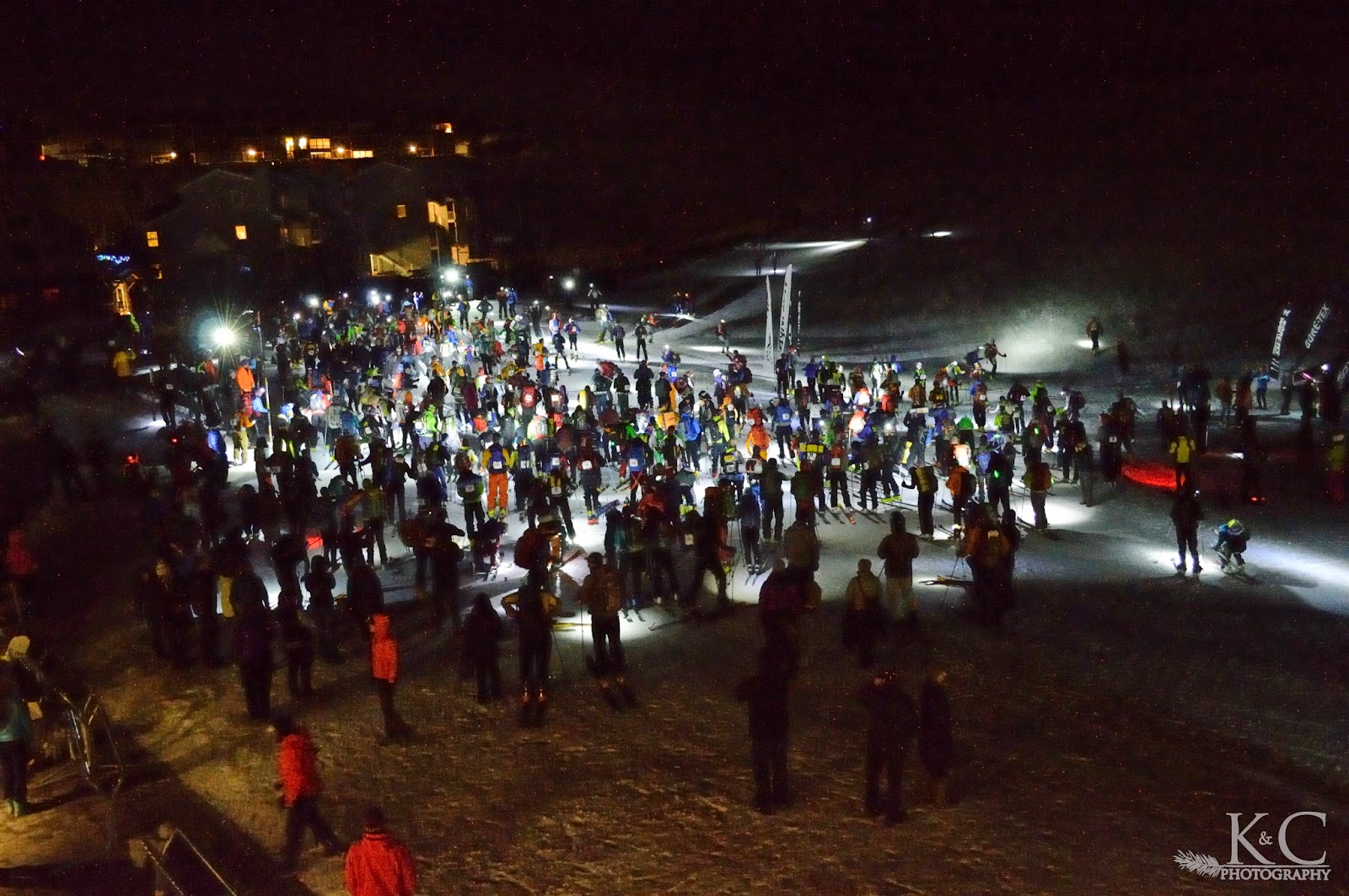 “The Pope” welcomes the racers and gives the command to go! 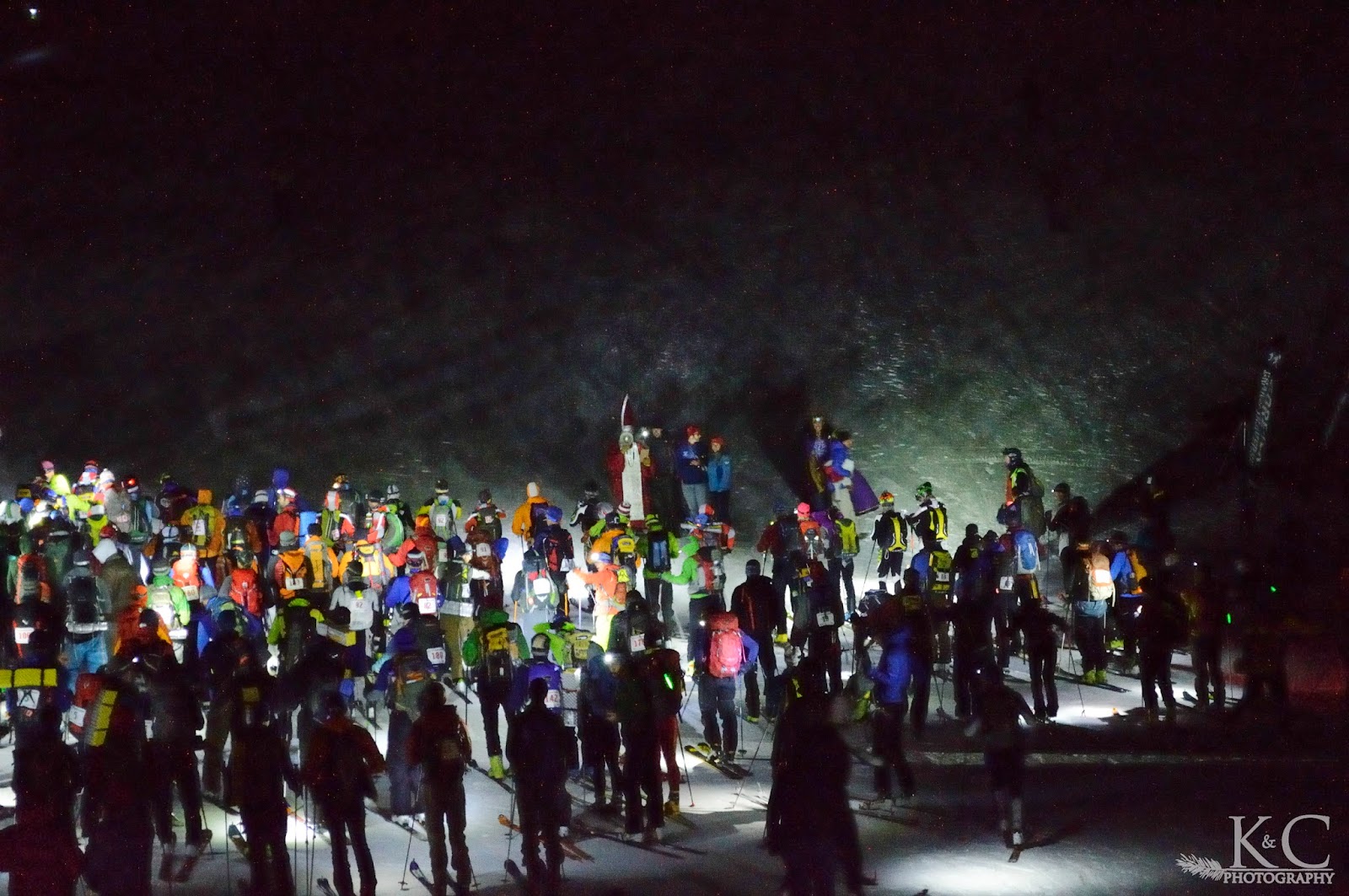 And they’re off, gradually fading into the distance… 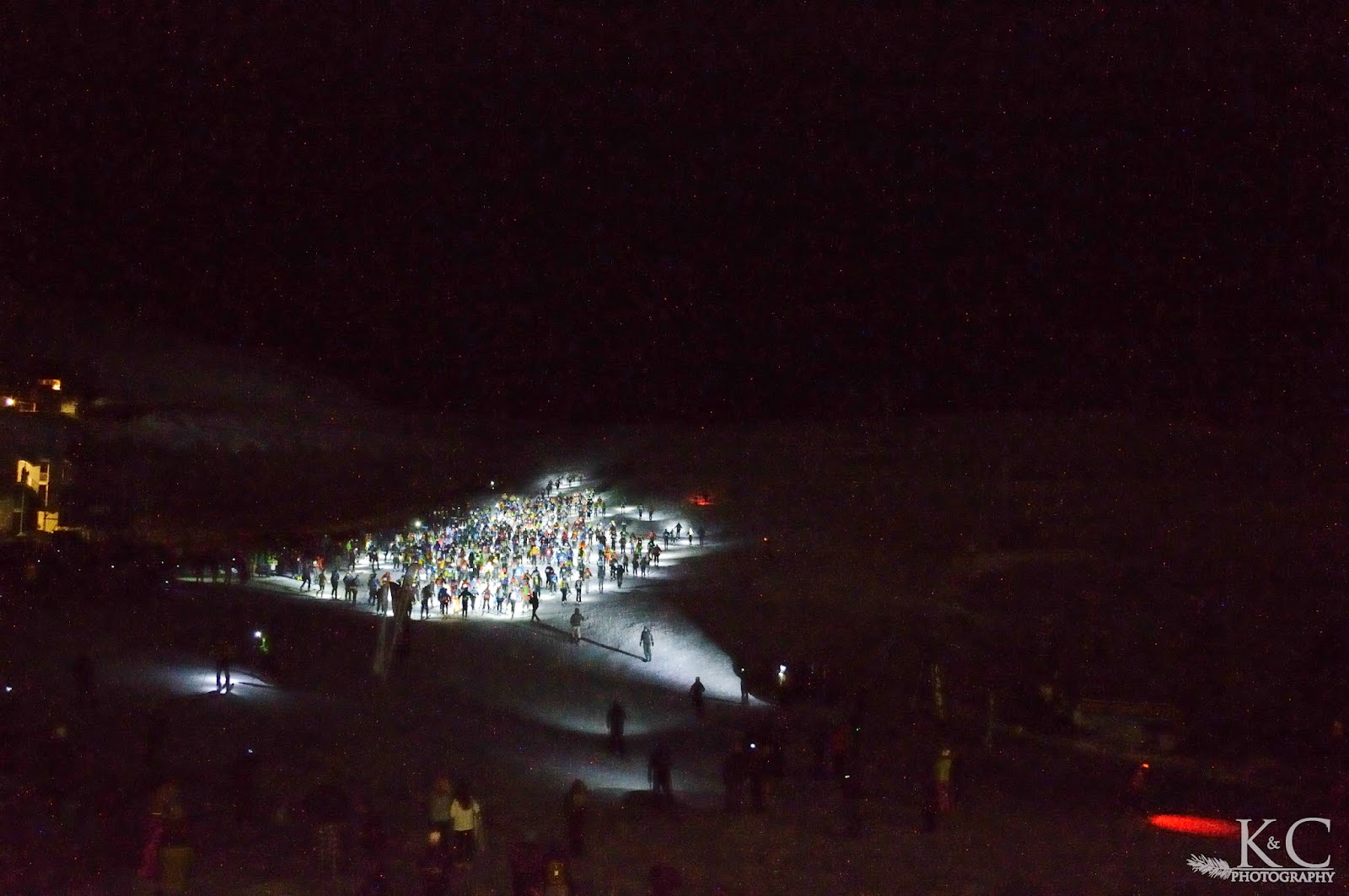 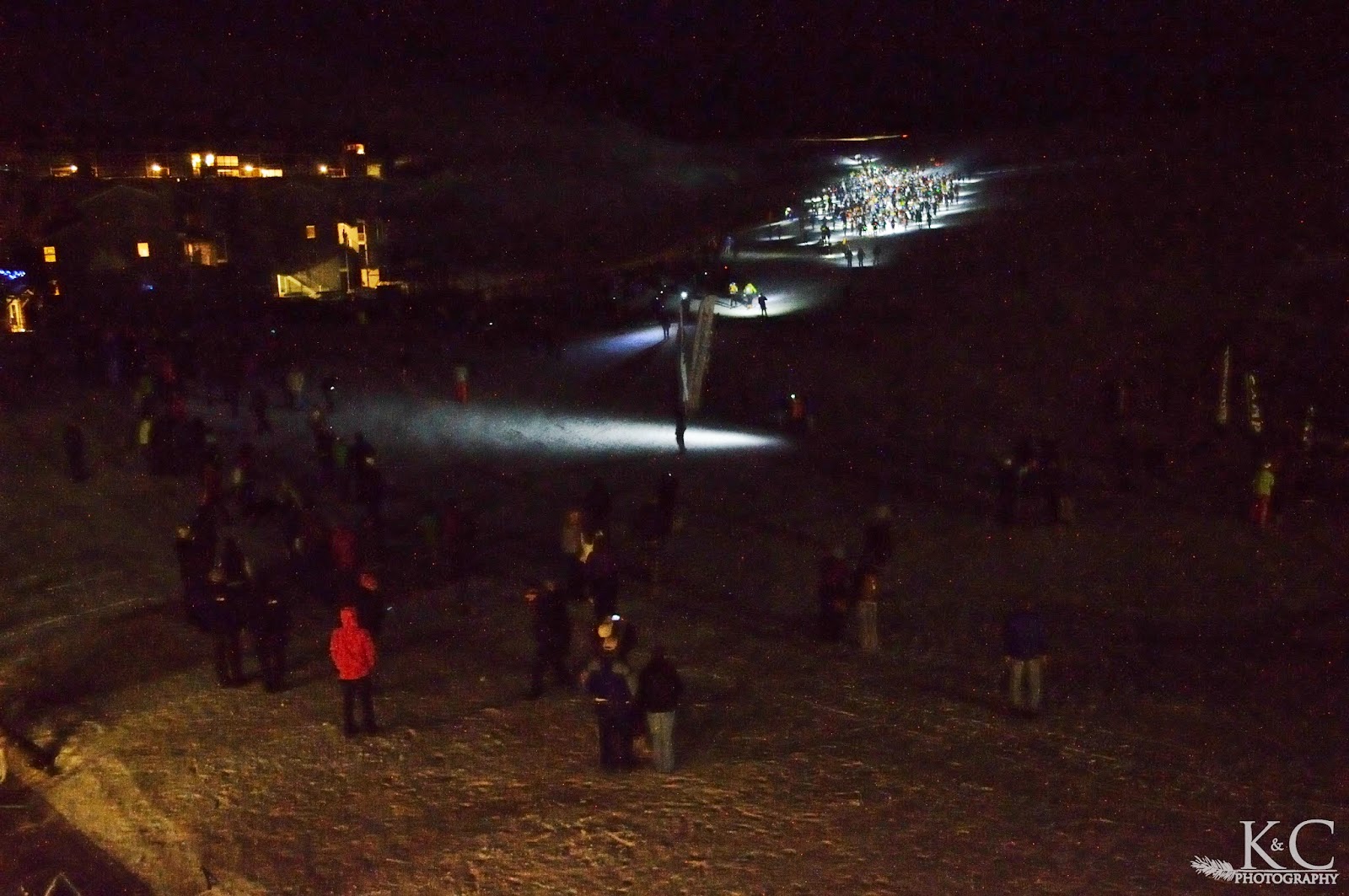 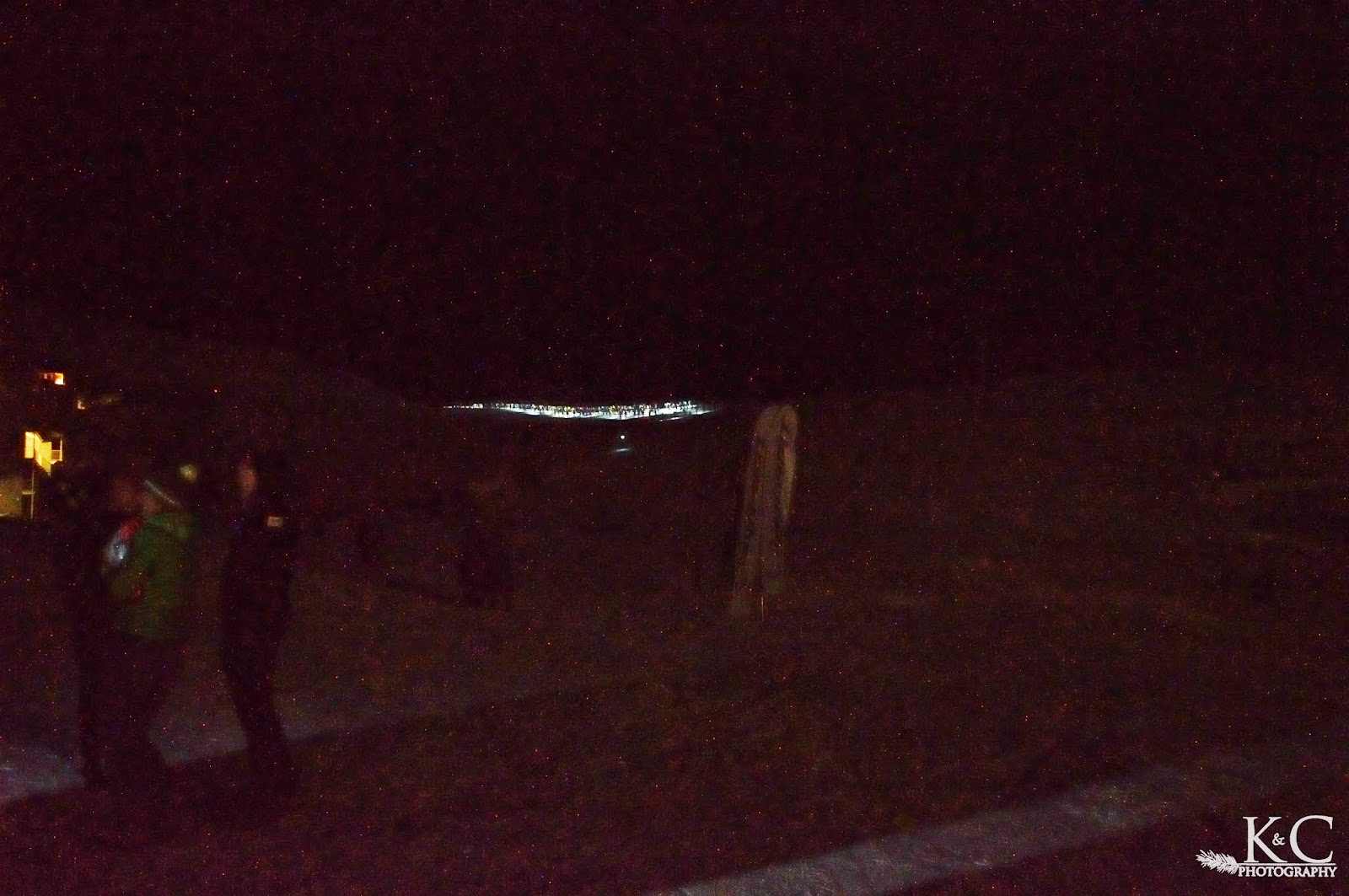 The town of Crested Butte has a super cute downtown area. It was fun just to wander, but here are the places that we specifically tried so if you ever visit it might help you choose among the numerous options:
The Eldo Brewery and Taproom – Truthfully somewhat rundown looking and the best place to sit was out on the deck, though there’s unfortunately not too much space out there when it’s busy. We enjoyed having a beer and just hanging out a bit before dinner though. The stout was decent. If nothing else, a brewery whose slogan on the door is “a sunny place for shady people” deserves a visit if you like beer.
The Brick Oven Pizzeria & Pub – Fun and casual. This place was packed on a Thursday night but we still got a seat right away. Large selection of beer on tap. We enjoyed the Tom’s Delectable White pizza and overall they had several unique specialty selections.
The Sunflower – What drew us here was an ad that spoke of their farm to table mentality and it’s neat to see a board at the front that describes where different ingredients they use come from. I would recommend this place for coffee or a quick lunch, which is exactly what we were looking for. The best spot is up front by the large window. My Reuben had to be adjusted with turkey instead of pastrami due to availability which was still good, but it was probably too light on the sauce. We don’t remember what sandwich K had but he thinks it was good if not memorable.
Princess Wine Bar (& Coffee House) – Just stopped in here for a quick coffee after cross-country skiing to rest and perk up but it had a nice bar area and good espresso and cappuccino.
Pitas in Paradise – Laid back place with fun decor. This is a more relaxed and less expensive option that some other things in the downtown with really tasty food. We had the original gyro and the falafel pita and were both really pleased.

Who: Young or old, there seems to be something to do here for everyone, during all seasons of the year. Best for folks that want to visit an adventure town that’s a bit off the beaten path, not as commercialized or busy as the others, and also more reasonably priced.

What: Though skiing is the activity du jour in the winter, there’s snowshoeing, cross-country skiing as well, lounging in the lodge by the fire, or mountain biking, fishing, hiking, and so on in warmer weather. You can shop and enjoy the restaurant scene all year long, not to mention the numerous festivals, concerts, and other events that the town hosts.
Where: About 4 hours southwest of Denver, 30 minutes or so north of Gunnison, surrounded by the Gunnison National Forest.
When: Any time of year – dependent on your interests.
Why: If you live in Colorado like us, we feel like it’s worth exploring and checking out its many different areas and towns. Crested Butte was named in the Top 12 Small-Town ArtPlaces in America in 2013 and the “Wildflower Capital of Colorado” by the Colorado State Legislature in 1990 and just has a lot to offer.
How: Fly to and/or drive from Denver, or use the regional airport in Gunnison. Public transportation for a fee can be arranged from Gunnison, and once there you can use free shuttles between the towns of Crested Butte and Mount Crested Butte.
Share the Adventure:

When we’re lucky, we’ll have WiFi directly in some of the campsites where we’ll be staying, but that hasn’t been the case since we left our friends’ house in IN. So, here we were setting up some posts from the last few days from a nearby lodge. It was quite comfy and convenient sitting there…

There are a lot of options for going whitewater rafting in Colorado. The whitewater here is great and the scenery is even better. We decided to stay closer to the Denver area and chose a guide service out in Idaho Springs, AVA – Arkansas Valley Adventures. K and I had each been whitewater rafting when…

We knew Olympic National Park was going to be pretty interesting, so we allotted quite a bit of time for it. We started off in the Port Angeles area for several days from where we saw sites along the northern and northwestern part of the park. Port Angeles sits on the Strait of Juan de…

Our last hike in Grand Teton National Park was into Death Canyon. It sounds pretty ominous but we escaped unscathed. One of our water bottles though did not, when it fell to its death down some rocks and into the roaring river… (Hier sind Bilder von unsere Wanderung zu Phelps See und Todes Schlucht.) We…