After we decided on and put in an order for our 2018 Jayco Pinnacle 37MDQS fifth wheel, which we wrote about in Purchasing our Jayco Fifth Wheel, we had to buy the right truck. When going through the process to arrive at our 2016 RAM 3500 Dually we were essentially faced with three questions: what manufacturer to go with, what size truck to get, and where to buy it from. Kevin did all of the research, presented the options and what he had learned, and guided us toward making the right decision. So the following is my summarized version. If you want all the technical inputs you’ll have to ask him!

Though all manufacturers have their pros and cons, here is our personal opinion on how we chose between them. We nixed Chevy almost from the get go. We weren’t comfortable with the payload which seemed lower as compared to the others. Making sure we had enough payload and room to spare was crucial. We had a great experience owning our Chevy Trailblazer but it just didn’t seem like the right fit in a truck.

Dodge spun off RAM back in 2009. Dodge now makes cars while RAM makes trucks. We looked at older Dodge trucks but because they fixed some things along the way in later model years and we want to keep this truck a long time we decided to go newer and look at RAM trucks.

Both RAM and Ford trucks were contenders. Payload is about the same on both. We test drove both of them a couple times. The Ford admittedly had a smoother more comfortable ride. But the RAM was a bit smaller and to us it felt easier to drive and maneuver. It also has a better turning radius. Kevin was also happy there was an option for an upgraded transmission in the RAM. So for us personally, the RAM was the right choice!

We wanted to make sure the truck had enough payload to handle all of its passengers and cargo plus the heavy pin weight of the trailer. It was important to feel confident in not only its pulling ability but also its stopping and turning ability. The truck should be stable in all conditions.

How far would we go?

If the price was right we were willing to go essentially country wide to get our truck. We would more than make up for the cost of getting there and back. Of course, cheaper and closer was preferred. Local dealerships couldn’t get us a truck with the right options for a good price. Local private sellers weren’t offering what we wanted either. So Kevin widened his search and kept a look out. When the right one popped up in Ohio Kevin was the first to send an inquiry. Because he was flying in from out of state they agreed to hold it for him. The price was amazing and it was exactly what we needed and then some.

So Kevin flew to Ohio, picked up the truck, and drove it all the way home in preparation for picking up our new fifth wheel. We are definitely happy with the truck we got, the price we paid, and our experience with it so far. It will pull our home to the sites of many adventures to come. 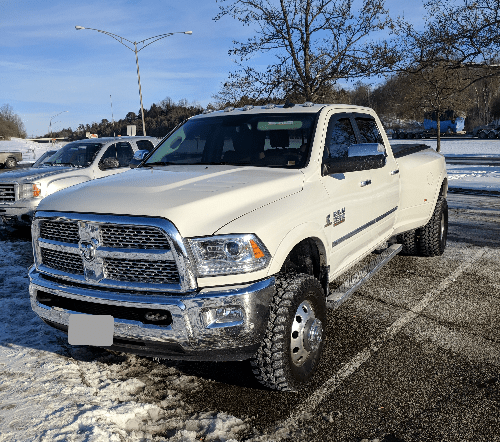 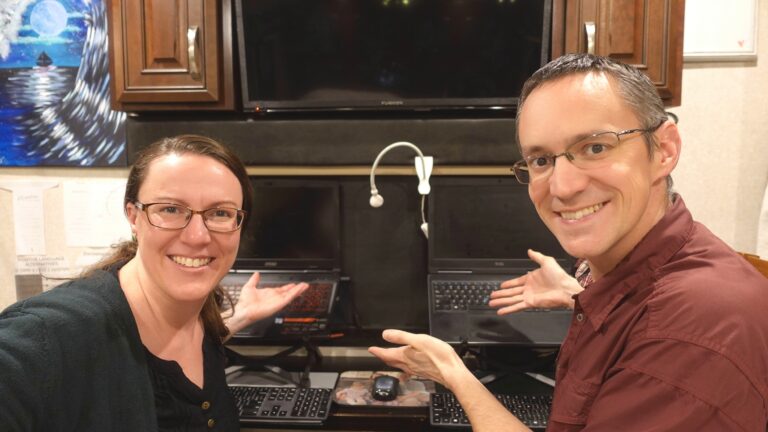 Let us show you our RV office setup and discuss other RV workspace options that have worked for us over the last several years as we’ve traveled full-time and worked from the road. While we could have gone with a mid den desk setup in our Jayco Pinnacle 37MDQS, we decided to make a master…

We figured there would be a breaking in period when we first got the trailer, time spent learning how things worked, ironing out the kinks, and so on. Boy did we have an interesting first time out. Our new trailer had arrived at the dealership, so we went up the following weekend to sign the… 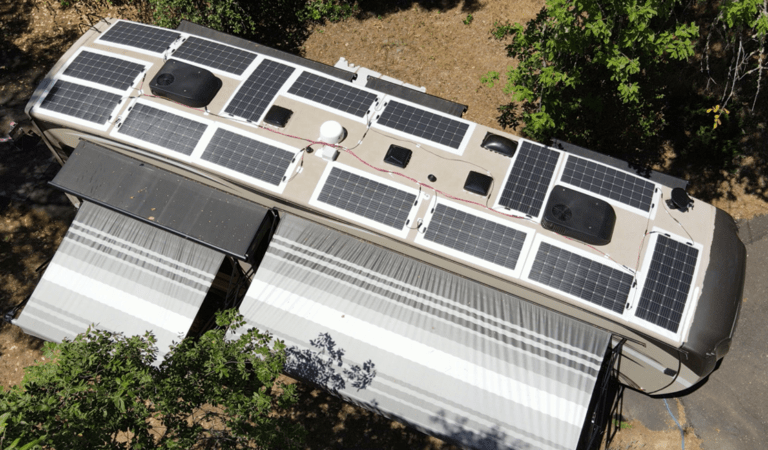 How many solar panels do you need? Let’s talk about different kinds, mounting, and where they’ll fit! Welcome to Part 4 in our 5 part series on how to design your own RV solar system. Let’s get started! We just finished talking about the real heart of an RV solar setup. So now we need…